Why we dumped Ralph Uwazuruike - MASSOB 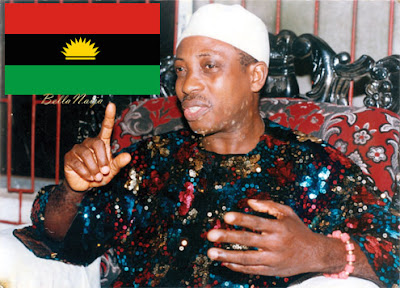 The Movement for the Actualisation of the Sovereign State of Biafra on Monday said it parted ways with its founder, Ralph Uwazuruike, because of his deceit.

MASSOB in a statement by its National Director of Information, Edeson Samuel, said its leader, Uchenna Madu, did not meet with Uwazuruike for a truce as speculated in the media.

The statement said, “The leadership of the Movement for the Actualisation of the Sovereign State of Biafra has denied ever having any direct or physical meeting with Ralph Uwazuruike. Our leader, Uchenna Madu, has never called, sent text or chatted with Ralph Uwazuruike directly or through someone’s phone since 2014 that MASSOB separated from him. “MASSOB received the headline news of a national newspaper that our leader is begging or appealing for forgiveness from Ralph Uwazuruike with shock.

“The executive officials of MASSOB under the leadership of Uchenna Madu are aware that Colman Emejuru (Ikemba Ndigbo), a selfless pro-Biafra activist, called our leader for a solidarity meeting which was scheduled for Enugu two weeks ago.

“His primary message to our leader and his executive officials is that he personally initiated a peace and harmonisation move to unite Ralph Uwazuruike, Nnamdi Kanu and Uchenna Madu for the sole purpose of marching forces together in order to enable a quicker restoration of Biafra.

“He told us that Ralph Uwazuruike was aware of his meeting with us and that he, Uwazuruike was equally happy for the peace and harmonisation meeting. The peace meeting was postponed and it has not yet reopened.”