We are deeply concerned about Sowore's detention ― U.S 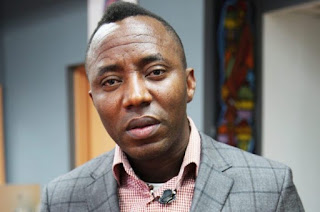 The United States Bureau of Democracy, Human Rights, and Labor has joined voices to express discontent at Nigeria’s Department State Security (DSS) action to rearrest Omoyele Sowore after he was released less than 24 hours. Sowore, the convener of the RevelotionNow Movement was rearrested by the security agency in the Federal High Court, Abuja premises following the adjournment of theur trial till February 11, 2019 by the sitting judge, Justice Ijeoma Ojukwu.

The U.S. State Department on its Twitter page (@StateDRL) said; “We are deeply concerned that Sowore has been re-detained in Nigeria, shortly after a court ordered he be released on bail. Respect for rule of law, judicial independence, political and media freedom, and due process are key tenets of democracy.”

The U.S. Department on its official website described its mission thus; “We advance American security in the struggle against authoritarianism and terrorism when we stand for the freedoms of religion, speech, and the press, and the rights of people to assemble peaceably and to petition their government for a redress of grievances.”

The United States Senator representing New Jersey, Bob Menendez also disputed the action of Nigeria’s DSS. He described Sowore as a prominent Nigerian-American journalist and activist in a statement posted on his official website; “I am outraged by the blatant harassment of Omoyele Sowore, an activist and journalist whose only crime appears to be exercising his right to free expression. “In a concerted effort to secure his release on behalf of the Sowore family living in New Jersey, my office has been working closely with the State Department as Mr. Sowore’s case languished following his arbitrary arrest back in August. While we continue to seek immediate answers about Mr. Sowore’s treatment and conditions in jail, I will be further engaging directly with U.S.

“Ambassador Mary Beth Leonard in Abuja to raise this case at the highest levels of the Nigerian government so the Buhari Administration gets the message that we are committed to defending Mr. Sowore’s rights and securing his release. “

“This blatant miscarriage of justice is symptomatic of closing political and media space in Nigeria.” The DSS however in a press statement Saturday said it re-arrested Sowore because he “resorted to acts inimical to security”. “It is most unfortunate that Sowore, shortly after being released from custody, based on the court order, resorted to acts inimical to security. To this effect, only Sowore has been re-arrested as his co-defendant, Olawale Bakare, was not picked up even when Falana had promised to deliver him to the Service that is not presently interested in him.”