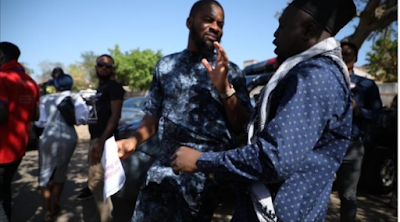 Thugs have attacked civil society organisation (CSOs) demanding the release of Omoyele Sowore at a protest in Abuja.

The incident occurred at the headquarters of the National Human Rights Commission (NHRC) in the federal capital territory (FCT).

The protesters were at the NHRC headquarters to present a letter of protest to the commission when the thugs unleashed violence on them on Monday.

Deji Adeyanju, convener of Concerned Nigerians, other leaders of the protest and journalists took to their heels in the melee.

It is unclear why the thugs attacked the protesters.

On December 6, Sowore was rearrested by operatives of the Department of State Services (DSS) a few hours after he was released. Before he was released he had spent 124 in custody.

The court had summoned Abubakar Malami, attorney-general of the federation (AGF), and Yusuf Bichi, director-general of the Department of State Services (DSS), over the detention of the pro-democracy activist despite a subsisting order for his release

Some Nigerians commenting on the incident on social media fear for Adeyanju’s life. There are also posts suggesting that he has been injured or even abducted.

Here is Deji Adeyanju brutally attacked and violently injured by thugs sponsored by those we all know.

This is what our country has become under a bloody tyrant.

Deji Adeyanju & other coalition of civil society groups were attacked by Pro - Buhari Group {as they were heard chanting Sai Baba} during a peaceful protest at the National Human Rights Commission HQ in Abuja. pic.twitter.com/WPbstLXLFM
— Gbemi Dennis™ (@GbemiDennis) December 23, 2019