Sowore: Malami speaks on letter from US lawmakers 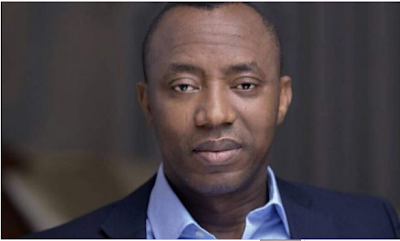 Mr. Abubakar Malami, SAN, Nigeria’s attorney-general and justice minister has denied receiving any letter from US lawmakers over the continued detention of Omoyele Sowore, convener of the RevolutionNow Protest and publisher of Saharareporters.

Dr. Umar Gwandu, Malami’s media aide said no such letter got to Malami’s office before the close of work last Friday.

Besides, Gwandu pointed out, “foreign policy conventions do not support direct correspondence between the office of the Attorney-General of the Federation and serving legislators of a foreign country”.

He said the Ministry of Foreign Affairs could be an appropriate Ministry for such correspondence.


“Attorney-General of the Federation finds media reports on the purported claim of such correspondence to his office, peddled by some unscrupulous elements in the society, as not only inappropriate but inaccurate.

“It is essential to put in the record that the so-called letter has not been received at the office of the Attorney-General of the Federation and Minister of Justice, Abubakar Malami, SAN as the close of the work of Friday 20th December, 2019”, Gwandu said.

In their letter addressed to Malami, US lawmakers complained over the continued detention of Sowore.

“We request that you take immediate steps to work to facilitate a speedy and fair resolution to the current circumstances of his re-detention; and ensure that he receives a legally sound and credible trial, consistent with Nigeria’s established judicial proceedings and the rulings that follow”

The lawmakers warned that Nigeria risks tarnishing its international reputation over Sowore’s indefinite detention and that “it will best serve Nigeria’s interests to protect and uphold the very legal systems that provide for stability and open dialogue.”

Sowore, former presidential candidate, was arrested on August 3 in Lagos for planning #RevolutionNow protests in the country.