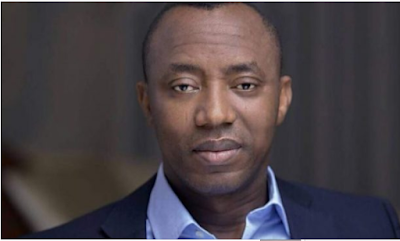 Ahmed Mohammed, a judge of the federal high court in Abuja, has recused himself from the case of Omoyele Sowore, pro-democracy activist.

The judge made this decision at the hearing of Sowore’s application for the enforcement of his rights on Monday.

Seeking the opinion of counsels in the matter, the judge said he had been accused of receiving a bribe in a certain matter by Sahara Reporters, an online platform owned by the defendant.

“When the registrar called me and said this file was assigned to me and she named the parties, I asked if the chief judge was around but he already travelled for Christmas,” he said.

“My conscience is telling me I should not take the matter but subject to what you would say or think.

“My grounds is nothing other than the applicant is the publisher of Sahara Reporters. Sometime in 2016, the same outlet accused me of taking money in a matter to compromise the course of justice and I returned the case file to the then CJ.

Mohammed said the case file was later returned to him after the intervention of Rotimi Jacobs and J.B Daudu, both senior advocates of Nigeria (SAN) involved in the matter.

However, the judge said the allegation came up again in June 2019

“Again, this year, around June, the same paper accused me of taking money in the same case. so, I had to hands off again and it was reassigned to Honourable Justice Abang,” he said.

“The case may go either way. It may succeed, it may fail. If my orders are not favourable to him, it would be seen as vengeful, or, while proceedings are ongoing, applicants will be apprehensive about what judgment I would give.”

Responding, Femi Falana, counsel to Sowore, said he was not aware of the publications.

He referred the court to the case of MKO Abiola Vs FRN in 1995 where the supreme court disqualified eight justices from hearing any of the appeals arising from Abiola’s case.

Falana said Concord newspaper which Abiola was the publisher had written a story concerning the eight justices which led to the institution of a libel suit against the newspaper.

He said a unanimous decision was reached by the apex court that those eight justices should recuse themselves in the interest of justice.

Falana, therefore, asked the judge to withdraw from Sowore’s trial.

“We are of the humble view that the case be sent back to the CJ for reassignment,” he said.

Godwin Agbadua, counsel to the Department of State Services (DSS), refused to state a position on whether or not the judge should recuse himself.

Representing the attorney-general of the federation (AGF) who is joined in the suit, Abdullahi Abubakar said he would align himself with the discretion of the court.

Giving his ruling, the judge said: “Justice is rooted in confidence; that is to say, none of the parties should have any fear that he will not get justice before any particular court. It is my belief that the only fair, just and proper cause to take in the circumstance of this case is to recuse myself from taking this matter.”

“Consequent on the above development, this matter is remitted back to the chief judge for reassignment to another judge.”

Sowore has been in the custody of the DSS despite a subsisting court order for his release.