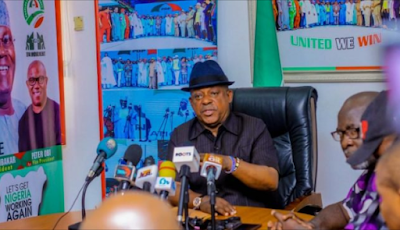 The National Chairman of the Peoples Democratic Party, PDP, Uche Secondus, has said that President Muhammadu Buhari and his ruling All Progressives Congress, APC, have laid landmines that may explode and ground the country in 2020 and warns Nigerians to brace up for the dictatorial regime in the new year.

Prince Secondus said that with the Judiciary caged, the legislature ready and willing to rubber stamp whatever comes from the executive, media and the opposition intimidated, Nigerians should await the fang of a dictator wearing the apparel of a democrat.

He said that with the huge loan demands passing through the National Assembly without scrutiny coupled with the accompanying high taxation bills from the executive, 2020 portends further hard times for Nigerians.

According to the opposition leader, 2020 is going to be tough with the high level of corruption already rated by experts to be worse under this administration as they continue to look away to reported cases of fraud involving high profile members of the regime.


Added to this is the ineptitude that has engulfed the oil sector and various agencies of government as square pegs are put in round holes at the expense of merits.

Reviewing the activities of the past twelve months in the country, Prince Secondus lamented that 2019 remains the worst year for democracy in our land.

He noted that the worst form of vandalization was done to democracy and rule of law in our country in the out going year and blames it on the anti-democratic forces being breed and nurtured by the APC to achieve their one party agenda for the country.

The PDP boss said in a new year message to Nigerians released on Tuesday that the rape done to democracy in 2019 during the February and March general elections set the nation’s democratic journey many years backward and laid foundation for a wobbling 2020 politically and economically.

“The use of military in the election matters and the intimidation and harassment of democratic institutions that was climaxed in the burning to death Mrs Salome Acheju Abu in Kogi state last November continues to raise concern over citizens right to vote under this regime.”

Prince Secondus noted in a statement from his media office signed and made available by Ike Abonyi that in the out going year, the APC administration dragged down the country and many are no longer proud to hold the national passport.

He, however, urged Nigerians to refuse to be deterred by the impunity and provocative attitude of the ruling APC whose agenda is to run a despotic regime disregarding the rule of law and tenets of democracy.

The National Chairman appealed to all critical stakeholders in the nation’s democracy particularly the media and civil society groups to remain alert to their responsibilities and hold APC administration accountable in 2020 as its curious open visa policy has dubious political undertone.

While wishing Nigerians a prosperous 2020, Prince Secondus charged members and leaders of PDP to put all hands on deck in the new year as the task ahead is enormous but surmountable with God on the side of the just.