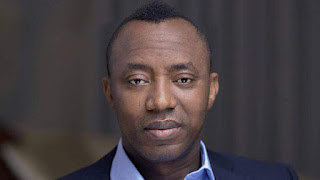 The Attorney General of the Federation and Minister of Justice, Mr. Abubakar Malami (SAN), on Sunday, denied receiving a letter on the continued detention of #RevolutionNow co-convener, Omoyele Sowore, from six United States of America lawmakers.

The minister made the denial in a statement by his spokesperson, Dr Umar Gwandu. He described media reports on the US legislators’ letter as inappropriate and inaccurate.

He, however, left a gap by failing to address the concerns raised by the American legislators in the widely reported letter dated December 20.

Sowore and his co-defendant, Olawale Bakare, were first arrested in August 2019 and were later in September charged with treasonable felony among other offences, for calling for the #RevolutionNow which is a series of protests to demand an end to corruption and demand better living conditions for Nigerians, but the Federal Government interpreted the protest as a call for an overthrow of the regime of the President, Major General Muhammadu Buhari (retd.).

A judge of the Federal High Court in Abuja, Justice Taiwo Taiwo, had earlier in September ordered Sowore’s release after the expiration of the 45 days period he permitted the Department of State Services to keep him for investigations for allegations of terrorism. The DSS refused to comply with the order.

The agency also ignored the bail granted to both Sowore and Bakare by Justice Ojukwu after they were arraigned before the judge.

But following the 24-hour ultimatum issued to the DSS by the judge on December 5, the two men were released from custody, but only for the operatives of the agency to invade the court on December 6, disrupting proceedings and causing the judge to flee her court. The DSS re-arrested Sowore that day.

Following the global outrage that followed the invasion of the court by the DSS operatives, Malami had announced that he had taken over the prosecution of Sowore and Bakare from the DSS.

But weeks after his acclaimed takeover of the case from the DSS, Malami has yet to handle the case differently from the DSS.

“Disturbing videos of the melee in court are circulating, which appear to show armed agents, in court and Mr Sowore being placed in choke hold after which he was re-detained by the DSS, though no new charges have since been filed to justify this re-detention. We understand that his case has since been placed within your purview,” their letter read in part.

They added, “Mr Attorney General, we request that you take immediate steps to ensure the safety and security of Mr Sowore while he is held in government custody; work to facilitate speedy and fair resolution to the circumstances of his re-detention; and ensure he receives a legally sound and credible trial.”

The lawmakers said Nigeria risked tarnishing its international reputation over Sowore’s indefinite detention, adding that “it will best serve Nigeria’s interests to protect and uphold the very legal systems that provide for stability and open dialogue.”

But without addressing the issue raised by the foreign lawmakers, Malami stated on Sunday that “foreign policy conventions do not support direct correspondence between the office of the Attorney General of the Federation and serving legislators of a foreign country”.

The statement noted the Ministry of Foreign Affairs might be be an appropriate Ministry for such a correspondence.

“It is essential to put on the record that the so-called letter has not been received at the office of the Attorney General of the Federation and Minister of Justice, Abubakar Malami, SAN at the close of the work on Friday, December 20, 2019.”