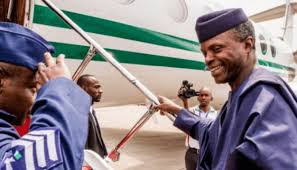 Vice President Yemi Osinbajo will on  Sunday depart for the city of Abu Dhabi in the United Arab Emirates(UAE).

Osinbajo’s spokesman, Laolu Akande, in a statement in Abuja, said the vice president would  deliver the keynote address at the Sixth Assembly of the Forum for Promoting Peace in Muslim Societies on Monday in Abu Dhabi.

The vice president would  speak on “The Role of Religions in Promoting Tolerance: From Possibility to Necessity.”

Osinbajo will also on Monday, at the Presidential Palace in Abu Dhabi,  meet with Sheik Mohammed Al Nayan, the Crown Prince of the Emirate of Abu Dhabi and Deputy Supreme Commander of the  UAE Armed Forces.


Both leaders will discuss bilateral issues on how to continue to expand diplomatic and economic relationships between Nigeria and the UAE.

The Assembly of the Forum for Promoting Peace in Muslim Societies is an annual event organized by the government of the UAE.

“The Sixth Assembly will build upon the discussions and outputs of previous assemblies, as well as appreciation of the UAE’s decision to proclaim 2019 as the year of ‘tolerance’.

“The Sixth Assembly envisages an opportunity to initiate a civilised dialogue on the formulation of a new concept of tolerance; one that is humane and generous, and to transform a perspective that makes tolerance a religious imperative,” the UAE government said.

Osinbajo is  expected back in Nigeria  on Dec. 9.