I had health issue before first Ruiz clash - Anthony Joshua 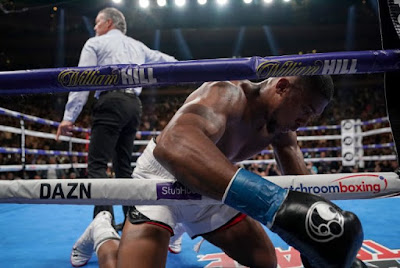 Unified world heavyweight champion Anthony Joshua said a health issue left him “tired” and “drained” in the build-up to his June defeat by Andy Ruiz Jr.

Joshua, 30, reclaimed his world titles in Saudi Arabia on Saturday, dominating the Mexican over 12 rounds.

Conspiracy theories had circulated after his initial defeat, one of the biggest shocks in heavyweight history.

“I had some issue with my health which I was going through for a long time,” Joshua told the BBC.

The Briton added, “I didn’t know what was wrong with me. I felt so tired and drained and thought it must be down to training.

“In the changing room before the fight, I got a bucket of ice and was putting my head in it thinking ‘why do I feel so tired?’

“The responsibilities of being world champion are difficult. All that stuff, feeling so tired, dealing with obligations.

“Now I have energy, I haven’t missed a session.”

He added, “After my check-ups it showed what the problem was and this is what you have to get sorted.

“Even in this camp I had an operation done but as I’d started training in June I had no issues.”

Joshua refused to say what the operation was but it is understood the procedure he had was linked to the issue diagnosed after his defeat by Ruiz.

Joshua had hinted previously that he had something to reveal about what went on before his first career defeat.