How I met my wife - Diezani's husband 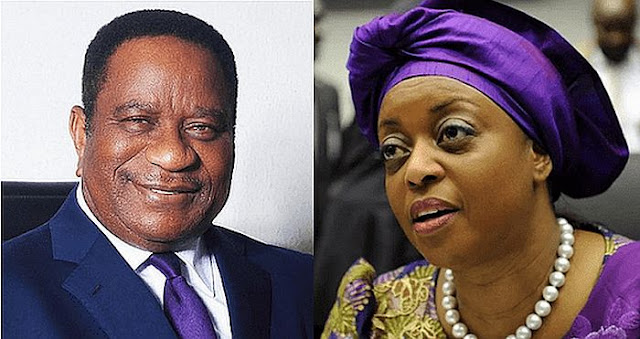 A former Chief of Naval Staff, Rear Admiral Alison Madueke (retd.), has revealed how he met, fell in love and married his wife, Diezani, a former Minister of Petroleum Resources.

Diezani’s husband revealed this in his recently published book titled, ‘Riding the storms with God on my side.’


Narrating how he met the former minister, Madueke said after he lost his first wife, Uche, in 1996, he felt lonely and had the huge task of raising his five children alone.

He said his oldest child, Chinedu, was in her first year at the George Mason University, United States while the youngest children were still in primary school.

The retired naval officer said initially, he did not want to get married again but when he began to entertain the idea, he got support from friends and relatives and he subsequently prayed to God to give him a wife that would love his children unconditionally.

Madueke said he was attending a church known as Victoria Fellowship Church which was founded by white expatriates from the US, England and Germany.

He said at some point in 1998, the church needed to construct a permanent site and two committees were set up to help bring the plan to fruition and Diezani had been appointed into the committee because she was an architect.

Diezani’s husband said, “On Sunday, the two committees had a joint meeting after church service. During the meeting, I noticed a pretty, young lady amongst us who I later learnt was Miss Diezani Agama.”

He said some weeks later, church members decided to inspect a site at the Parkview Estate, Ikoyi for possible location of the church’s permanent site

Madueke added, “We drove in a convoy after church service for the inspection. It turned out I was inspecting much more than a church site! Diezani was in the employ of Shell Production and Development Company. She held down the portfolio of Head of Corporate Issues.

“She was the second daughter of Chief Frederic and Mrs Beatrice Agama who lived in Port Harcourt, the third born in a family of six children. She was 39, I was 55. She was elegantly dressed and had a dignified comportment.

“She looked right in my mind; she met my mental picture of a wife. My appraisal was later confirmed by some close friends who knew her. I believed God had finally set me on the right bearing and what remained was mine to accomplish.

“After that meeting, we exchanged numbers. Eventually, I asked her out to dinner. This took place on April 10, 1999 at the Shadow Lane, a restaurant on Victoria Island, Lagos. I bought dinner and she gave me a birthday present of an audio Bible in cassettes. She was aware I had celebrated my birthday.”

The retired naval officer said he gradually began to sell the idea of marriage to Diezani and explained to her that he had five children and was a widower who was dealing with bereavement.

He said Diezani was very open and told him how important it was for him to remarry on time so that the children would get used to having a new woman in the house.

The former CNS said he and Diezani got closer and he began to tell his confidants about the idea of marrying her.

Madueke said he also informed his two oldest children who were rounding off their university education and they also gave their blessings.

He added, “Having concluded my consultation with my parents-in-law, I returned to Lagos and invited Diezani for a chat. It was at this meeting that I proposed marriage to her. I told her that I had spoken to everyone that I should discuss the matter with and all of them fully supported the idea.

“She said yes to my proposal and we started making arrangements about formalising our relationship which included seeing our parents. On June 30, 1999, we had a civil wedding at my house in Lekki, Lagos; officials of the Ikoyi Marriage Registry were invited to perform the ceremony.”

The retired naval officer said at the end of the brief ceremony, they all went to La Scala Restaurant, Lagos, Muson Centre, for lunch and on July 23, the traditional wedding took place in Port Harcourt which had a much larger crowd.

“Our marriage was blessed with a boy on February 23, 2001. Diezani gave birth in the US; her mother was at hand to assist after delivery. My father-in-law requested to name him and without knowing the import of his choice, named him Chimezie, the name of my paternal grandmother, meaning God always makes it right,” he said.