Buhari, is N37bn largesse to n’assembly reward for being rubber stamp legislature? 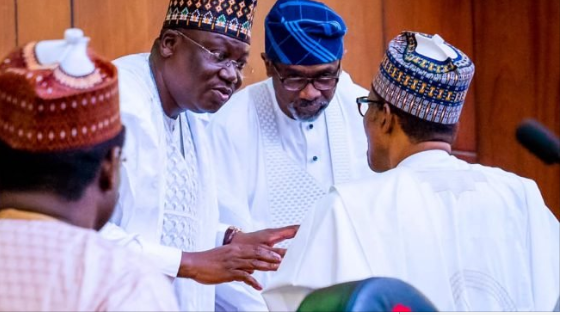 Former President Olusegun Obasanjo is one person who has felt the sting of the avarice of the national assembly. At different points, he described the institution in blackened terms. Though the former president may hold a provincial grudge against the legislature for ‘’obvious reasons’’ – the botched third-term agenda — the institution is just as he has daubed it.

On November 26, 2014, at the book launch of the late Justice Mustapha Akanbi in Abuja, Obasanjo evoked pejoratives on the national assembly. He said it was an ‘’assembly of thieves and looters’’.

He airbrushed the iniquities of the legislature with a mural of disgust thus: “Apart from shrouding the remunerations of the national assembly in opaqueness and without transparency, they indulge in extorting money from departments, contractors and ministries in two ways.’’

“They do so during visits to their projects and programmes and in the process of budget approval when they build up budgets for ministries and departments, who agree to give it, back to them in contracts that they do not execute. They do similar things during their inquiries.”

On August 18, 2017, at the public presentation of a book written by Professor Mark Nwagwu in Ibadan, Obasanjo caught the ‘’bud’’ again. This time he described the national assembly as a ‘’bunch of armed robbers’’.

“It is even worse for the national assembly. They will abuse me again but I will never stop talking about them. They are a bunch of unarmed robbers,’’ he said.

“They are one of the highest paid in the world where we have 75 per cent of our people living in abject poverty. They will abuse me tomorrow and if they don’t, maybe they are sleeping. The behaviour and character of the national assembly should be condemned and roundly condemned.”

Bukola Saraki was the senate president in 2017 when Obasanjo ‘’verbally assaulted’’ the national assembly. The annual budget of the legislature was about N115 billion at the time, and was a single-line item as well, until a few months after the 2019 election when a breakdown was published.

From 2007, the budget of the national assembly was kept in wraps like Pandora’s Box. No transparency, no accountability.

In her book, ‘Fighting corruption is dangerous: The story behind the headlines’, Ngozi Okonjo-Iweala, former minister of finance, revealed the intrigues, blackmail and backhand deals that denote budget passage by the national assembly.

She said the national assembly exceptionally added N17 billion to its budget of N150 billion before it agreed to pass the 2015 appropriation bill.

On Tuesday, a report by Premium Times asked President Muhammadu Buhari to beware that the 2020 budget passed by the national assembly contains N264 billion fraudulent projects.

The national assembly under the leadership of Ahmad Lawan and Femi Gbajabiamila is yet to publish details of its budget of N128 billion for 2020. We are back to the days of ‘’sour yore’’.

One thing is clear; the national assembly is an institution which orbits around pecuniary concupiscence and gluttony. ‘’Always hungry and always eating’’.

Besides the N128 billion budget of the legislature, the president approved an extra N37 billion for the ‘’renovation’’ of the national assembly complex.

It is really puzzling. Is the extra ‘’N37 billion’’ a backhand package to the national assembly for being a good lapdog of the executive? Is it a token for compulsively being a rubber stamp legislature? Or is it as Okonjo-Iweala described in her book?

On Tuesday, Gbajabiamila asked a question to which he is the answer. ‘’Are we rubber stamp legislators?’’. Mr Speaker should look in the mirror.

As a matter of fact, this national assembly which is in bed with the executive as a consort is a great threat to our democracy.