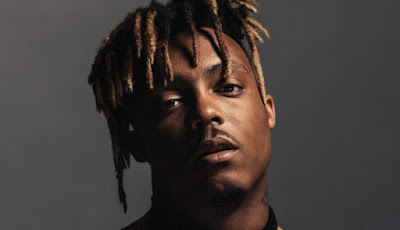 He died after suffering a seizure in Chicago’s Midway airport, TMZ reports.

It was learnt that Juice’s flight from California landed early Sunday morning and he suffered the seizure while walking through the airport.

It was reported that Juice was still conscious when he was rushed to a hospital but was pronounced dead a short time later at the hospital.

As at the time of filing this report, the cause of his death is unclear.


But, law enforcement sources say he was bleeding from the mouth when paramedics got on scene.

Higgins began to develop himself as an artist in his first year of high school. His first track, “Forever”, was released on SoundCloud in 2015 under the name JuicetheKidd. Higgins recorded a majority of his first tracks on a cellphone, uploading them to SoundCloud in his sophomore year.His name changed from JuicetheKidd, a name inspired by his affection for rapper Tupac Shakur and his part in the film Juice, to Juice Wrld because it “represents taking over the world.”

His first track produced by his last producer Nick Mira, “Too Much Cash”, was released in 2017.While releasing projects and songs on SoundCloud, Higgins worked in a factory but was fired within two weeks after finding himself dissatisfied with the job. After joining the internet collective Internet Money, Higgins released his debut full-length EP, 9 9 9, on June 15, 2017, with the song “Lucid Dreams” breaking out and growing his following.