Yahaya Bello is a bigger masquerade than David Lyon - Oshiomhole 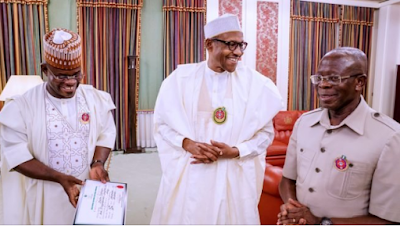 Adams Oshiomhole, national chairman of the All Progressives Congress (APC), has described Yahaya Bello, governor of Kogi state, as a bigger masquerade than David Lyon, governor-elect of Bayelsa state.

Speaking with state house correspondents after he presented Bello to President Muhammadu Buhari on Thursday, the APC national chairman said winning election for a new term shows the governor of Kogi is tested and trusted.

He also described Bello as a “baby boy” the same way he did to the incoming governor of Bayelsa.

“We have just met with the president to present to him yet another bouncing baby boy, delivered from the womb of APC on Saturday November 16th,” he said.

“You recalled that some days back we were here with governor-elect David Lyon but this is a bigger masquerade that came out later. Because, in his own case he is now qualified to be called tested and trusted. He has gone through elections and emerged victorious after the first term.

“So for us in the APC, we are very proud and we presented him to the president. The president was very proud, of course he congratulated, he was happy to see his certificate and he has encouraged us to recognize that the reward for hard work as they say is more work.


“And I am sure that Governor Yahaya Bello having passed through the learning curve is going to approach the second term with all the vigor with eye for posterity and legacy marks in the development of Kogi state.”

On his part, Bello, who had earlier received a certificate of return from the Independent National Electoral Commission (INEC), said he would meet his opponents in court if they decide to challenge his victory.

He urged the people of Kogi to support his second term, meant to “further promote unity and togetherness among the various ethnic groups in the state”.

“I told you sometimes back that the issues of winning the election was not in question but the margin with which I will defeat my opponent, and that he will have no reason whatsoever to go tribunal. However going to the tribunal is their right and if they so wish, we will meet in court,” he said.

“But I want to use this opportunity to call on all those that contested the elections with me starting from the Primaries of our party to the main election, all other political parties to please join me, we are all citizens of Kogi State, in the this next level so that we can together do more for Kogi state.

“I inherited a state that was largely divided along ethnic lines but this particular election, I was able to put that behind us, that ethnicity is not the way, that it is a monster that has held the country down and that tore the states apart sometimes. By the special grace of God, today in Kogi state ethnicity has been buried finally.

“We have a lot of task ahead of us, the journey has just begun, I need the cooperation and understanding of every citizens and residents of Kogi state to join hands with me so that we can do more for Kogi state.”