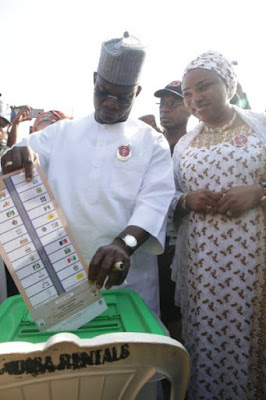 Governor Bello who is seeking election for a second term arrived his polling unit of Agassa Uvete 11, Okene Local Government Area of the state at about 8:30am cast his ballot alongside his wives at 8:41am amidst praises and excitement by his kinsmen.

Bello who also commended voters for the peaceful conduct, stressed that the enthusiasm of the voters in his polling unit was a demonstration of their love and affection for his candidature.

Satisfied with the process, Governor Bello revealed that reports from various parts of the state indicate that election was peaceful and orderly, and urged the people of the state to be law abiding.

He expressed optimism in his ability to trounce his opponents, saying that the people of the state appreciate his commitment to the peace, unity and development of the state.

The Governor applauded the security agencies for their efforts in ensuring law and order, as his administration would not compromise on the security and peace of the state.