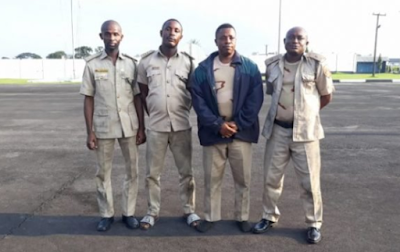 Samson Raphael, an official of the Nigeria Immigration Service (NIS), has lauded the Nigerian Navy for rescuing him and three of his colleagues from kidnappers in Rivers state.

Raphael, a senior immigration inspector from the Rivers marine command of the service, was abducted alongside three others by suspected militants on Tuesday.

The other victims are: Peter Ofili, Asuquo Ededet and Hafiz Moyi.

The officer, who spoke with NAN in Port Harcourt on Thursday, said they were kidnapped while travelling on board a speed boat.

“We left Bonny Island on board a speed boat for an official assignment in Onne. On our way to Onne, we were apprehended by gunmen at about 8am on Tuesday,” he said.

“Immediately the kidnappers stopped our boat, they pointed their guns at us and threatened to shoot if we did not cooperate.

“Thereafter, they forcefully took us and sailed the sea for about 10 hours before we arrived their camp.”

He said they were kept in a hut after they arrived the kidnappers’ camp in a dense mangrove forest.

“Later, our abductors told us that they will contact our superiors to demand for our ransom. They threatened to bury us alive if NIS and our families failed to cooperate.

“Thankfully, they were unable to carry out their threats due to the timely intervention by troops of the Nigerian Navy that raided the camp on Wednesday.

“On the day of our rescue, we heard heavy gunshots and immediately laid flat on the floor. We suspected that such superior fire power could come only from security agencies.

“Afterwards, we saw naval operatives shooting and pursuing the fleeing captors. Later some navy personnel came to where we were held and rescued us.”.

Ebo handed over the victims to personnel of the police command in Rivers.

“After we learnt of the abductions and gathered available intelligence, we conducted a clearance operation on Nov. 13 at the suspected militant camp in Ikelekele, River,” he said.

“The operation, comprised of a combined officers and men of NNS Pathfinder and Navy Forward Operating Base (FOB) Bonny, successfully rescued the NIS officers without any casualty.”

“We were unable to make any arrest as the suspects escaped from the camp during the raid. However, we saw traces of blood that suggested that some of them sustained gunshot injuries,” he said.

“To this end, a search is currently ongoing with a view to locate and apprehend the hoodlums that fled the camp.

“We urge the public to report any suspicious person with gunshot wounds, particularly, those living in communities where the militant camp exist, to the nearest police station.”