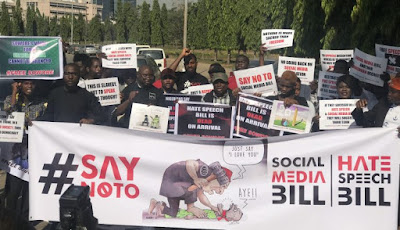 A policeman on Wednesday assaulted a journalist while covering a protest against the recently introduced Social Media Bill in Abuja.

According to reports, dozens of protesters marched to the National Assembly complex demanding that the Senate suspends the bill aimed at regulating social media in the country.

During the protest, a policeman, Adiogu Enyinnaya, did not only assault but also seized the camera of Tosin Busayo of Roots Television.

The offence of Busayo, according to the policeman was that he was filming another Police Officer who was trying to prevent the protesters from gaining entrance into the Complex.


Enyinnaya, who led the police cordon had whipped the journalist with his baton, and forcefully took his camera.

“Why would you be filming the policemen?” he demanded while threatening to arrest Busayo.

It took a combination of pleading and protest by other reporters before Enyinnaya released the camera.

The protester called for the stoppage of the social media bill and the release of Omoyele Sowore, Abba Jalingo and others who are currently being held by security agencies against court orders.

Shield noted that there are existing laws in Nigeria which are appropriate for dealing with the issues alluded to in the bills.

Senators Uba Sani and Oseni Yakubu addressed the protesters on behalf of the President of the Senate, Ahmad Lawan.

Sani said that the bills would not be passed if they are rejected by Nigerians during the public hearings.

Sani, who represents Kaduna Central said: “We have heard your agitation. We believe it is a very important agitation. Some of us in the Chamber have also been involved in the struggle for the enthronement of democracy in the country.

“The two bills in question are bills that were introduced by some of our colleagues. Some of us in the National Assembly, including the Senate President, would appear at the public hearing. Whatever Nigerians want is what the 9th Senate would do.

“The law is not about the 109 Senators. It is about Nigerians. Democracy is about free speech, it is about rule of law. That is why their voices are extremely important.

“That is why we believe that your agitation is valid and also in the best interest of our own county. We are going to certainly work with you on the day of the public hearing.

“I have no doubt in my mind that if Nigerians don’t want these bills, even though they are being sponsored by our colleagues, certainly it won’t escape the public hearing. I can assure you we are going to do whatever is in the best interest of our own country.

“We are aware of Section 24 of the Cybercrime Act and some of us are on the same page with these agitations.

“We are not guided by any political affiliation. We are guided by the law and concerned about the progress of our own country.”

On his part, Yakubu said: “I want to assure you that the 9th Senate is not in any way an appendage of the executive.

“No single bill will pass without public hearing. We are here to make laws for Nigerians not the Senate.

“We are all here to protect the interests of Nigerians.”