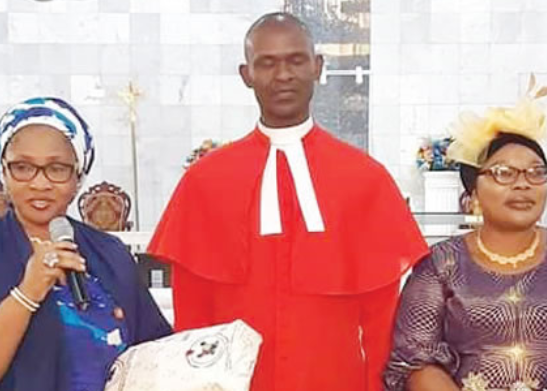 The Lagos state Government yesterday November 27th, honored the former presiding Chaplain of the chapel, Venerable Femi Taiwo, who was sacked in 2017 after an alleged fallout with the wife the immediate past governor of the state, Bolanle Ambode.

Taiwo was dismissed from office after he allegedly failed to accord Mrs Ambode her due respect as wife of a sitting governor during a church service. It was reported at the time that Mrs Ambode and her team had gone to the church for an anointing service and stormed out of the service after the clergyman allegedly failed to carry out the anointing on her before others.

Shortly after Mrs Ambode left, the clergyman was reportedly served a dismissal letter and asked to vacate the church premises with his wife and children. Church members rallied round to provide the clergyman and his family another accommodation as well as some household items. This elicited angry reactions from residents of the state who condemned the dismissal of the clergyman.

The Governor Babajide Sanwo-Olu administration through the Ministry of Home Affairs and Culture, yesterday honored the clergyman at a very private ceremony. The state Commissioner of the Ministry, Mrs. Uzamat Akinbile-Yusuf, led a team of her ministry staff to pay a visit to the church where Taiwo was appreciated.

Reacting to the honor done him, Reverend Taiwo said

“I thank God for His faithfulness and the uncommon grace and rare privilege He has given to me. I thank the Lagos State Government and Mr. Governor, Aduramigba Iyanuoluwa Babajide Sanwo-Olu. I appreciate you and everyone. In the midst of the storm of life, you stood by me. The day I was to leave here, I saw angels coming down in the form of men. Spontaneously, I saw members of this church come around me and providing all a man could need to survive.

“What happened that day, nobody prepared for it; nobody thought of it. But God went ahead and made the crooked way straight. I thank and appreciate all of you and I pray that the glory of God will shine on your lives. Throughout the time I spent here, I had no regrets, because you were all around me. That is why I cannot forget this place; I cannot forget your beautiful faces''.

The church members who attended the ceremony, expressed joy at the state government's decision to honor Taiwo. It is however not clear if Taiwo would be getting back his apartment and other benefits he lost after his dismissal.