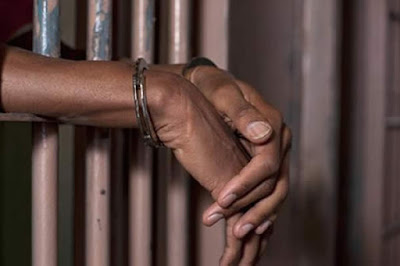 The Civil Defence, Correctional, Fire and Immigration Services Board has approved the suspension of three officers and six other men of the Nigerian Correctional Service implicated in the $1m internet fraud.

The fraud was allegedly perpetrated by Olusegun Aroke, an inmate serving a 24-year term in the Kirikiri Maximum Security Custodial Centre in Lagos.


Those arrested include the Deputy Controller in charge of the facility, Emmanuel Oluwaniyi and DC Hemeson Edwin.

Aroke was given a referral to be treated outside the facility during which he pulled a $1m scam.

An investigation panel constituted by the Controller-General of the Service, Jaáfaru Ahmed, was said to have indicted the officers of complicity in the scandal.

This was contained in a statement signed by the NCS spokesman, Francis Enobore, in Abuja on Wednesday.

Enobore said while handing down the suspension order, the CG noted that “the task of correcting maladjusted persons in society requires a measure of moral rectitude to make positive impact on offenders in custody.”

He restated the “irreversible commitment” of his administration to ensure that those without adequate “strength of character and integrity are not allowed to taint the sanctity of the Nigerian Correctional Service.”

The statement read, “The Civil Defence, Correctional, Fire and Immigration Services Board has approved the suspension of three officers and six other ranks of the Nigerian Correctional Service implicated in the alleged internet fraud, suspected to have been perpetrated by Hope Olusegun Aroke, an inmate serving a term of imprisonment in Kirikiri Maximum Security Custodial Centre, Lagos.

“This is based on the preliminary report of the investigation panel earlier constituted by the Controller-General of the Service, Jaáfaru Ahmed, which indicted the officers of complicity in the scandal.”

The Economic and Financial Crimes Commission had on Monday arrested Oluwaniyi and Edwin, for allegedly procuring exaggerated medical report for Aroke.

The agency said its preliminary investigation revealed that the convict, against established standard practice, had access to the internet and mobile phone in the correctional centre.

Aroke was one of two Malaysia-based Nigerian undergraduate fraudsters arrested by the EFCC in 2012 at the 1004 Housing Estate, Victoria Island in Lagos.

He was convicted by Justice Lateefa Okunnu of the Lagos State High Court, Ikeja, on two counts of obtaining money by false pretence, cheque cloning, wire transfer and forgery.