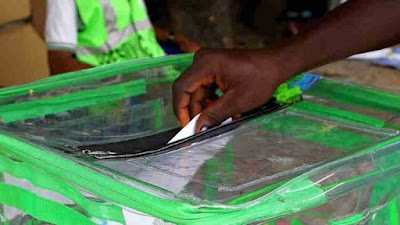 Tension remains very high as voters in Bayelsa and Kogi states file out today to decide who takes charge of the administration of their states in the next four years.

Only yesterday, it was widely reported in the media how gunmen reportedly dressed in police uniforms on Friday stormed the Suitoral Hotel, Lokoja, the state capital where Oyo state governor and Chairman of the PDP Campaign Council, Seyi Makinde, was lodged.

The masked gunmen could not gain access into the main hotel as they were repelled by security men attached to Governor Makinde.

However, it was revealed that Governor Makinde was not the target as the governorship candidate of the Peoples Democratic Party (PDP), Musa Wada, was within the precincts of the hotel to hold discussion with his guest, Governor Makinde.


As at the time TNG field this report, tough-looking security agents were seen on the streets of Yenagoa and Lokoja, while residents and the Independent National Electoral Commission (INEC) plead with the political parties for peaceful poll.

In Bayelsa State, the governorship election is a straight fight between Douye Diri of the Peoples Democratic Party (PDP) and David Lyon of the All Progressives Congress (APC).

Lyon, who had earlier been disqualified by a Federal High Court in Bayelsa State on Thursday, got a lifeline yesterday from an Appeal Court sitting in Port Harcourt, which ordered INEC not to remove him from the ballot. The court gave the order following an ex parte motion filed by his counsel on Thursday.

In Kogi State, incumbent governor, Yahaya Bello of the APC has Musa Wada of the PDP to contend with.

Incidents of violence and intemperate use of language have characterised the campaigns leading to today’s elections. In some cases, lives were lost.

Nevertheless, the Inspector-General of Police, Mohammed Adamu assured voters in both states of maximum security. Speaking on Tuesday in Lokoja, Adamu said security operatives on election duties would not hesitate to gun down any unauthorised person attempting to use firearm in any part of Kogi State during the ongoing electioneering process.

Adamu gave the warning during a stakeholders’ meeting/signing of Peace Accord among political parties and candidates, organised by INEC.

The police boss, who spoke after INEC Chairman, Prof. Mahmood Yakubu had delivered his address, also warned policemen on guard duties with politicians not to allow themselves to be used by politicians to perpetrate illegality on the election day.

He warned that any policeman caught roaming the street without proper authorisation would be arrested.

He assured the general public that the police would be professional and ready to provide a level playing ground for all parties and participants, adding that the police and other security operatives on election duty would protect all INEC and other electoral officials, as well as materials for the exercise, against attacks.