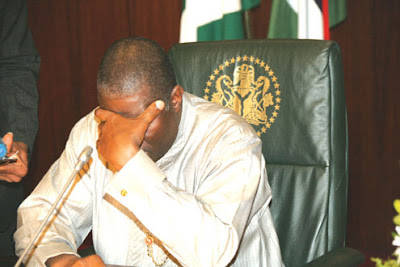 Ex-president Goodluck Jonathan has described the signals from Bayelsa and Kogi states as worrisome, saying that only electronic voting process could stop thuggery, violence during elections in Nigeria.

Jonathan expressed sadness that people were already being killed when election had not begun, adding that the only way out was electronic voting.

He spoke in Port Harcourt on Thursday during the presentation of a book authored by a former deputy governor of Rivers State, Sir Gabriel Toby, titled ‘In the Cause of Service: Memoir of Gabriel Tamunobiebere George Toby’.


The former President stressed that the people would be able to elect those they believed in should the country begin to vote electronically.

He expressed optimism that electronic voting would work in Nigeria, owing to the fact that several Nigerians transferred billions of dollars from one bank to the other through electronic means.

“Look at what is happening now; we have governorship elections in two states in Kogi and Bayelsa. The signals coming from both are quite disturbing.

“The use of thugs, shooting guns and our people are already being killed when the voting process has not even started is disturbing. This would not happen if we have got to a point in this country where voter card matters.

Jonathan further noted that political offices in the country did not change their holders, rather, the people with low integrity were being voted into offices.

He added that when the country developed to a point where voter card mattered, politicians would mend their ways.

“My opinion is that people don’t change when they get into political office; we vote people that we don’t know into offices and it is difficult to know the true character of a person; it is hard to understand, but the fact is we don’t really vote people we know. People tend to use different means to get into office.

“When we develop as a nation to the point where our voter cards matter, where the people can vote, who they believe in, the behaviour of the politicians would change; politicians would stop recruiting group of boys and feeding them like dogs, calling them thugs to be used for elections while their children attend the best universities abroad,” the ex-President added.

Addressing a press conference in Lokoja on Thursday, Ali said that the Inspector-General, Mohammed Adamu, had deployed enough personnel to adequately police the state and deal with any eventuality during the election.

The DIG stated, “We are determined to provide an enabling environment for a peaceful election. We are tired of being held to ransom in Kogi and Bayelsa states at the turn of every election, we will put a stop to that this time around”.

He said that the police had undertaken a security threat assessment in both Kogi and Bayelsa states and had identified possible risks, located trouble spots, and classified individuals and groups that could constitute security challenges to the process.

Ali said, “The outcome of this intelligence-driven initiative guided our election deployment plans and informed our post-election security projections.

The DIG said that the police were determined to create an environment that was secure and peaceful enough to give confidence to the political actors to undertake their campaigns and other political activities and for the citizens to freely exercise their electoral franchise.”

TheMusa Wada/Sam Aro Campaign Organisation of the PDP raised the alarm that thugs had been ‘imported’ into Kogi State by the APC.

The Director, Media and Publicity of the campaign organisation, Mr Frank Adejoh-Audu, in a statement, urged the police to quickly arrest and flush out the hoodlums before their presence.

He said, “Our campaign has been told by insiders in the Bello camp, of how the hoodlums were brought in from other APC states, with instructions to unleash violence, including killing, harassment and snatching of ballot boxes to derail the smooth conduct of the election and ensure that votes do not count.”

But the APC urged the PDP to stop spreading rumours and fake news. The Chairman, Media and Publicity Committee of the Bello/ Onoja Campaign Council, Mr Kingsley Fanwo spoke while addressing journalists after the APC mega rally in Lokoja,.

He charged security agencies to fish out the “imported killers.” He accused the PDP of importing thugs into the state.

According to him, the PDP raised “false alarm” to scare voters from coming out to exercise their franchise.

On Thursday, the Kogi State PDP Campaign Council raised the alarm that members of the Oodua Peoples Congress had allegedly invaded Kogi West and Kogi East senatorial districts for the governorship election in the state.

The Deputy Director, Public Communication of the campaign council, Mr. Austin Okai, in a statement, sought the intervention of traditional rulers over the alleged invasion.

He said the OPC members were brought into the state from Ekiti State to cause mayhem during the election.

He also alleged that the OPC members were brought to aid the alleged rigging plans of the All Progressives Congress in the Saturday election.

According to him, the OPC members, who would wear fake military uniforms were brought to the Kogi West and Kogi East to stifle the opposition and ensure the victory of Governor Yahaya Bello.

He appealed to the Department of State Services to be weary of the antics of the people that were determined to cause crisis during the election, particularly in the strongholds of the opposition.

He said the OPC members had already been drafted to strategic areas of the state with the aim of taking instructions from government on how to perpetrate their illegal acts.

He pleaded with the traditional rulers, as the custodians of the society, to prevail upon the governor not to throw the state into crisis.

Efforts to get the response of the media aide to the Kogi State Governor, Mr Kingsley Fanwo, proved abortive as his mobile indicated it was not available. He had yet to respond to a text message on the subject as of the time of sending this report.