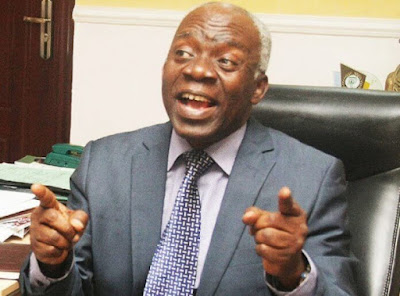 Senior Advocate of Nigeria (SAN), Femi Falana, has reacted to the hate speech bill currently debated upon  by the National Assembly,  asking the  lawmakers to make laws that will pronounce death penalty for corruption perpetrated by politically exposed persons.

Falana described it as an encroachment on the legislative autonomy of the state governments.

The Senior Advocate of Nigeria (SAN), explained that the National Assembly has no power to exercise such power because Hate Speech is not covered in the Exclusive Legislative and Concurrent Legislative Lists.

He said: “Since we are operating a federal system of government the supreme court of Nigeria had declared in a number of cases that the national assembly lacks the constitutional powers to make laws outside its legislative competence, which are by implication residual matters meant for the houses of assembly of the states. Certainly, the hate speech bill is an attempt to encroach on the legislative autonomy of the state governments.

“However, it is pertinent to point out that the Penal Code and Criminal Code applicable in the northern and southern states respectively have made provisions for hate speech because it is a state offence. Hence, the house of assembly of each of the state has enacted laws against incitement, false accusation, sedition and criminal defamation.”

Mr Falana decried the move, urging the sponsors of the bill to uphold the decision of Nigeria’s founding fathers who created a constitution that guarantees freedom of speech.

“The decision of the founding fathers of this present constitution which guarantees freedom of speech which must include freedom to criticize should be praised and any attempt to derogate from it except as provided in the Constitution must be resisted. Those in public office should not be intolerant of criticism. Where a writer exceeds the bounds there should be a resort to the law of libel where the plaintiff must of necessity put his character and reputation in issue.

“Finally, while the leaders of the national assembly may want to advise the legislature in each of the states of the federation to review the applicable penal statutes to review the provisions on hate speech we are compelled to urge the few bloodthirsty legislators in the national assembly to amend the anti-graft laws to provide death penalty for grand corruption perpetrated by politically exposed persons to the detriment of development in the country.”

He added that even though the bill is sponsored by a member of the House of Representatives, it has been adopted by the Buhari-Led Federal Government.

He maintained that the constitutional validity of the Bill will be challenged in the Federal High Court if it is passed by the national assembly and assented to by President Muhammadu Buhari.