Five hospitalised as building collapses on demolition workers in Lagos 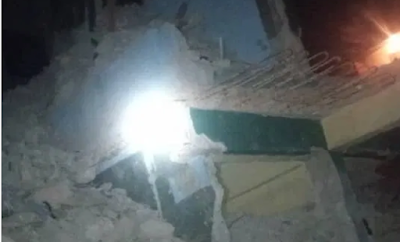 Five workers were injured when a distressed building in Enu Owa on Lagos Island caved in leaving the occupants badly wounded.

As at the time of filing this report,it was not certain whether people were still under the rubble but the Lagos State Emergency Management Agency (LASEMA), said only the five people were trapped and had been taken to the hospital.

The unfortunate incident occurred in the heart of the popular Enu Owa Market on Obanikoro Street.

It was learnt that the building caved in when efforts were being made to pull it down via control demolition. It collapsed on the workers who were trying demolish the building.

Confirming the incident, the General Manager, LASEMA , Dr Femi Oke-Osanyintolu said no life was lost in the building collapse.


He said: “The five adult workers according to on–site investigations conducted by LASEMA’s Team, all became victims of a failed controlled demolition site that collapsed on them while they were attempting to bring down the building. A process that lead to their hospitalization.”

“However, the five victims of this ongoing operation have been moved to nearby hospitals,” he added.