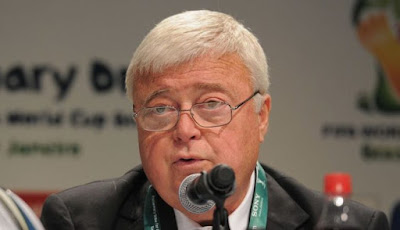 World football’s governing body said the Brazilian was banned and fined one million Swiss francs (907,000 euros) for taking bribes for marketing and media rights for continental and Brazilian football competitions between 2006 and 2012.

FIFA said in a statement that its investigation into Teixeira focused on “bribery schemes” carried out between 2006 and 2012 “in relation to his role in awarding contracts to companies for the media and marketing rights” for competitions run by the federations (CBF) of Brazil, South America (CONMEBOL) and North and Central America (CONCACAF).


Teixeira, a lawyer by profession, is wanted by US authorities for his part in the major corruption scandal that erupted in 2015 implicating the then head of FIFA Sepp Blatter and a string of top officials in world football.

His successor Jose Maria Marin was arrested in Zurich in 2015 ahead of a FIFA meeting, extradited to the United States and later sentenced to four years in prison by the American courts.

But Teixeira and another former CBF chief Marco Polo Del Nero have remained in Brazil and escaped extradition.

Teixeira also dodged a Spanish attempt to bring him to justice for alleged involvement in the same case that saw ex-Barcelona boss Sandro Rosell jailed.

He has also been under investigation in Andorra and Switzerland.

“Is there a safer place than Brazil? Which? Why would I run if here I’m not accused of anything? Everything they accuse me of abroad is not a crime in Brazil. Not that I’m saying if I did it or not,” he told the Folha de Sao Paulo newspaper in 2017.

Well before the FIFA scandal, Teixeira was one of the main beneficiaries of ISL — the discredited Swiss marketing firm in charge of rights for FIFA before going bust in 2001.

According to court documents made public in 2012, ISL paid out kickbacks of over 40 million Swiss francs to Blatter’s predecessor Havalange and Teixeira between 1992 and 2000.

Aside from Marin the only other leading South American football baron to appear before US justice was Juan Angel Napout.

The former Paraguayan football chief and ex-president of CONMEBOL was sentenced to nine years in prison at his 2018 trial.

Polo Del Nero was also banned for life for his role in the scandal.