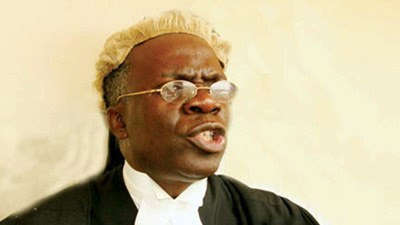 Falana sad this in a statement while reacting to clams by DSS Spokesman, Peter Afunaya, that a former National Security Adviser, Col. Sambo Dasuki (retd.); the leader of the Islamic Movement of Nigeria, Sheikh Ibraheem El-Zakzaky; and others in custody freely chose to remain in the custody of the DSS rather than in prison.

However, Falana, who represents El-Zakzaky, said the claims by the DSS were misleading.

He said this was the same way the DSS tried to mislead the public about its refusal to release Sahara Reporters publisher, Omoyele Sowore, because no one had come to receive him.

The senior advocate noted that in the case of Dasuki for instance, the DSS arrested the former NSA after he had been granted bail and released from prison.

Falana, therefore, wondered why the DSS would continue to tell lies.

He said, “Within a spate of one week the SSS has adduced three contradictory reasons for not complying with the order of the Federal High Court for the immediate release of Sowore and Bakare from illegal custody.

“In a public statement issued on November 9, 2019, the SS claimed that it had wanted to release the duo but for the fact that no one had shown up to receive them. When their lawyers and family members offered to receive them the SSS disqualified them.”

He said instead of apologising for exposing Nigeria to underserved odium, the spokesperson for the security agency asked Nigerians to believe that Sowore, Bakare, Mr. and Mrs Elzakzaky and Col. Sambo Dasuki (retd.) rather chose to be looked after by the DSS

The activist noted that at various times in the past four years, several courts admitted Dasuki to bail pending trial.

Falana added, “Upon meeting his bail conditions on December 30, 2015, he was released by the Kuje Prison authorities. However, SSS operatives arrested him at the gate of the prison and he has since been detained in defiance of the orders of the aforementioned municipal and regional courts.”

The senior advocate noted that the Federal Government had on many occasions justified the detention of Col Dasuki and the Elzakzakys by saying that the local and regional courts had failed to take cognisance of the fact that “national security takes precedence over the rule of law.”

He, therefore, wondered why the DSS was coming up with fresh excuses.