BREAKING: We are ready to release Sowore, says DSS 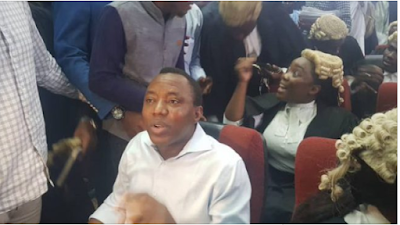 The Department of State Services (DSS) says it is ready to release Omoyele Sowore, convener of RevolutionNow Movement.

Sowore was arrested in Lagos on August 3 and subsequently flown to Abuja where he has been detained.

A federal high court in Abuja had granted him bail but the activist is yet to regain freedom even after fulfilling his bail conditions.

This had prompted a nationwide outrage. Protesters converged on the DSS headquarters of the agency on Tuesday to demand his release.


During the protest, some security agents clashed with Sowore’s supporters. Pictures showing the security operatives pointing guns at the protesters went viral on social media.

But reacting in a statement on Wednesday, Peter Afunanya, spokesman of the DSS, said operatives of the agency, did not open fire on protesters but prevented them from forcefully breaking into the agency to release Sowore.

“The DSS wishes to state that its operatives did not open fire on alleged protesters who had stormed its facility on 12th November, 2019,” he said.

“As a normal global security practice, the operatives stood in defence of their facility when some group of persons made unruly attempts to forcefully break into the place and effect the release of Omoloye SOWORE.

“Despite serial and unwarranted provocations, the Service, as a professional and responsible Organisation, did not shoot at the so called protesters. It could not have done so.

“For emphasis, the Service reiterates its avowed readiness to release SOWORE once the processes are concluded.”

Afunanya said those who have offered to take delivery of Sowore are not qualified to do so.

He said while some people were politicising the detention of the activist, others are using it as an avenue to launch smear campaign against the agency.

“While all those that have so far shown up are not directly concerned with the matter and therefore unqualified, many others have either chosen to grandstand or politicise it to achieve hidden interests,” he said.

“In the last few days, the Service has continued to witness deliberate campaigns of calumny, threats and aspersions against it. It will not, for any reason, join issues with its mudslingers. The media is called upon to be neutral and remain champions of the truth.

“It is only appropriate that those who stood surety for SOWORE present themselves and have him released to them. It is even more disappointing that Femi FALANA, who is a senior lawyer, would wrongly guide his client and supporters. He is rather playing to the gallery and mobilizing miscreants to subvert the Service and other state authorities. He has excellent relationship with the DG SS. But in the circumstance, he has refused to reach out to him over the case like he had on previously related ones.

“For the avoidance of doubt, the Service restates its commitment to the rule of law and particularly respect to the Court. It, therefore, calls for calm but states that it will not be intimidated or harassed into hasty actions.”