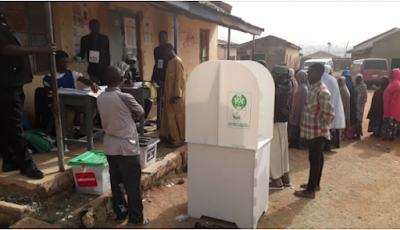 The response of security agents and the electorate on the situation reports of the conduct of the ongoing Bayelsa and Kogi governorship elections are so impressive.

The Nigeria Civil Society Situation Room (NCSSR) says it has deployed no fewer than ninety election observers to Bayelsa for effective monitoring.

Esther Uzoma, Alternate Chairman of NCSSR, a coalition of civil society organisations, says that the coalition is working in partnership with other stakeholders such as the Police Service Commission to monitor the conduct of the election.

She says further that NCSSR would collate information from the field to assess the level of compliance with electoral rules and guidelines.

In Yagba West of Kogi, there was a good early turnout of the electorate for accreditation and voting in some wards.

One of the electorate, Mr Bayo Ajayi, said that the election was very “peaceful at the moment, as there is no distraction from anywhere.”

Although in some wards in Lokoja, some voters complained that their names were missing on the voter register, officials of the Independent National Electoral Commission allayed their fear.

In Bayelsa, although there was an initial delay in the arrival of electoral materials from the Registration Area Centres (RAC) to polling units in some wards, there was no report of violence.

Vehicles conveying both sensitive and non-sensitive materials were seeing ready to move the materials to the appropriate wards at the time of filing this report.

In Yenagoa, although some homes certain areas are submerged in flood, the electorate was ready to vote after accreditation.

Amid effective security, Mr Pere James, an electorate said “we are still waiting; we cannot go to the units now because we have seen INEC officials.

“I believe is because of the flood; as you can see, every home is under the water.’’

At Opolo, Mr James Fefegha, a voter at Unit 6, Ward 2, “the election started early today and materials arrived early and we are waiting to vote already while the atmosphere remains very peaceful.’’

Assemblyman Salo Adikimo, representing Sagbama Constituency III at the Bayelsa House of Assembly said that he was impressed by the conduct of the election.

“You can see that the entire ward is calm, there are no threats of crisis, no form of tension; we are prepared to begin voting any moment from now.

“Our people are fully informed and aware of their responsibility during election, you can be sure that they will conduct themselves peacefully,’’ he said.

Another voter in Tumgbo, Mr Tambi Wariebi, also told NAN that he was confident of a hitch-free poll, observing that the presence of security agents in the area gave an assurance of safety and security during the election.