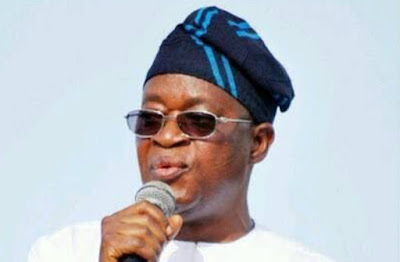 There is obvious anxiety and palpable apprehension in Osun State, as Federal Government deducted the sum of N2.01bn from the last allocation accruing to the state to service external debt and other contractual obligations.

According to a report from the Federation Account Allocation Committee, which was prepared by the Office of the Accountant-General of the Federation, the aggregate deductions from all states for the month of September was N35.51bn.

It added that while Lagos State tops the list of states with the highest deductions of N3.23bn, Osun came second with N2.01bn.

It is against this backdrop that the Chairman, Commissioners of Finance Forum of the Federation Account Allocation Committee, Mr David Olofu, in an interview with newsmen in Abuja, called for concerted efforts by all critical stakeholders to work towards boosting the revenue base of the nation.


He specifically implored revenue generating agencies to do more in opening more frontiers for generating revenues into the federation account, as the Minister of State, Budget and National Planning, Mr. Clem Agba challenged Commissioners of Budget and Economic Planning in all the states to be innovative and proactive.

Agba, who gave the charge recently at the meeting of the forum of Commissioners of Budget and Economic Planning, emphasized the urgent need for them to devise alternatives means of generating revenues for their states to complement allocations from the Federation account and for the purpose of appreciable economic development.

However, all efforts to get reactions from the duo of Commissioner for Finance in Osun , Prince Bola Oyebamiji, as well as his counterpart from the Ministry of Budget and Economic Planning, Professor Olalekan Yinusa, proved abortive, as the two individuals refused to answer several phone calls put through to them by our Correspondent, neither did they respond to text messages.

Meanwhile, the Chairman of Osun Internal Revenue Service, Mr. Gbite Ademikanra through a text message informed our Correspondent of efforts putting in place to jack up Internally generated revenues in the state, saying the administration of Mr. Adegboyega Oyetola, through the agency has ”fantastically and creatively worked to boost the state’s IGR without placing unnecessary burden on the people of the state”.

Ademikanra explained that the IGR of the state has tremendously improved by almost 100 percent.

A civil society organisation, Advocacy for Liberty and Civil Responsibility has carpeted the All Progressives Congress, APC, and the last administration in the state for what it termed ‘reckless spending and lack of fiscal consciousness’.

The National Coordinator of the group, Comrade Shola Igbalajobi further berated the incumbent Minister for Interior, Mr Rauf Aregbesola, who was the former governor in Osun State of throwing the state into serious debt without a convincing justification.

Igbalajobi argued that there is neither record of logical expenditure, nor the level of infrastructural development in the state to justify ‘heavy debt’ hanging on the neck of the state .

”I think the state is in serious mess by these deductions, it is a clear manifestation of the huge debt incurred by the last administration of Ogbeni Aregbesola, as a result of reckless spending and lack of financial savvy.

”I wonder how the state will survive in the face of this reduction, considering the meager allocation accruing to it from the Federation account.

‘It is indeed very unfortunate that the state is having sleeping State House of Assembly with docile and timid leadership that do not even know how to bark let alone going ahead to bite, otherwise, the parliament would have called Aregbesola for questioning, how could he have incurred so much debt with little or nothing to show for it.

‘Also, the incumbent Governor, Mr Adegboyega Oyetola lacks requisite moral standing to initiate any probe, having be a determining factor in the last administration” he resorted.