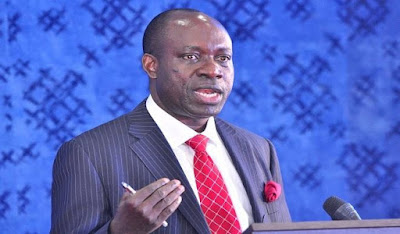 Charles Soludo, a former Governor of the Central Bank of Nigeria (CBN) on Tuesday said there is an urgent need to liberate the country from the choking hold of Abuja if she must move forward.

The professor of economics, who is a member of the Economic Advisory Council just inaugurated by President Muhammadu Buhari, said this at an economic summit to commemorate 59 years of Nigeria’s independence.

The summit was organised by Platform Nigeria, a vision of Poju Oyemade, the senior pastor of Covenant Christian Centre, Lagos.


The 2019 economic summit was tagged “Re-designing the Nigeria Economy with New Ideas.”

Soludo said the country is in dire need of innovations and competitiveness at all levels.

According to him, the game of the future is ”innovate, commit or die.” He said Nigeria needs to start preparing for a world without oil, which calls for innovations in diverse aspects of the economy.

“We need to start preparing for 400 million people that will soon be upon us in a world without oil. We have been living on the life support of oil, when oil goes up, the economy goes up and when oil comes down, the economy comes down.”

He said Nigeria needs to be committed to equipping its people and youth with technology.

“The misery that will befall us is to continue to churn out millions of semi-illiterates youth and largely unemployed citizens,” he warned.

He called for a devolution of powers, which means giving powers back to the people.

While recognising the importance of governance, Soludo said Nigeria requires new mechanisms rather than “the constitution and command and control institutions concentrated in Abuja.

“There is need to liberate the choking hold of Abuja on the country so that innovations and competitiveness can thrive.”

He said to create a new trajectory for the economy, something different has to happen. He urged Nigeria to begin to create a progressive institution for a world without oil.

Other speakers at the Summit were Bismarck Rewane, the Managing Director of Financial Derivatives Company Limited; Anil Gupta, a leading expert on Strategy and one of the world’s “most influential management thinkers; Peter Obi, a former governor of Anambra State; and Babajide Sanwo-Olu; the governor of Lagos State.