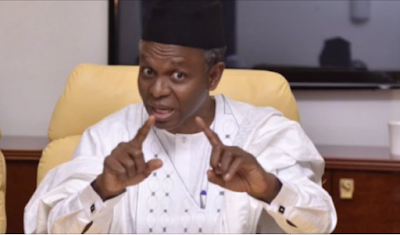 The Governor of Kaduna State, Mallam Nasir El-Rufai, has been commended for being the first Nigerian State Governor to implement the N30, 000 Federal minimum wage.

The commendation was made by a former National Publicity Secretary of the defunct New Peoples Democratic Party (nPDP) and a chieftain of the All Progressives Congress (APC), Chief Eze Chukwuemeka Eze.

Eze also described Governor El-Rufai’s action as not just historic particularly now that report had it that about 95 Per Cent Of States can’t Pay the N30,000 Minimum Wage, but one that has placed him on a whole new higher pedestal in Nigeria’s governance chart.

Eze challenged other State Governors across the country to borrow a leaf from the welfarist approach of the Kaduna State Governor by understudying how El-Rufai managed to implement this in a State that is not an Oil producing State.


He also charged the labour and trade unions in Kaduna to mobilise the state’s work-force to support the Governor in his quest to transform their State and to make it leading light of development governance in Nigeria.

The party chieftain, who described the Governor as “a man of the people and lover of the welfare of his people”, also said he was overwhelmed by his bold approach to leadership and tasked him to reason with his other 35 colleague-state governors to organise a seminar, which will address how he has managed to achieve this feat and learn how to replicate same implementation across the other states of the federation.

“I must confess that I am motivated and encouraged by Governor El-Rufai’s boldness and urge him, for the benefit, development and emancipation of our people, to organise a seminar on behalf of the remaining 35 state governors of the federation, which if approved I, Eze, am ready to contribute to enable the ‘Peoples’ Governor’ to lecture them on the possible implementation of this policy, even while most of them are owing several months of salaries to their civil servants under the 18,000 minimum salary scale.

“I learnt that this was possible following the approval by the State Executive Council sometime in August. I therefore rejoice with the employees of Kaduna state government who have begun receiving salary alerts for the month of September already, thereby making the state the first to begin implementation in the country”, he said.

Quoting a beneficiary-civil servant of Kaduna state by the name Zubairu Bello, a Grade Level 10 officer, Eze depicted the delight now being expressed by employees of the state government. According to him, Bello said he received the alert of N65,500, representing a N25,500 increase from the N40,000 he receives monthly as salary.

“I am so happy with this development, because now I can comfortably feed my family, pay school fees and make some savings. I want to thank El-Rufa’i for the gesture. This is a proof of his administration’s commitment on putting people first”, Bello had said.

In the same vein, the party chieftain joined former Vice President Namadi Sambo to commend El-Rufai for completing the Zaria water expansion project, which has not been upgraded for 42 years, saying “this is another great feat and an important milestone, which will go a long way to address the perennial potable water shortage in the ancient city and improved social and economic life of the people.”

He, however, expressed his intention to visit Kaduna State in the nearest future to study more about the 300 bed specialist hospital under construction, Governor El-Rufai’s industrial and development plans blueprint, with the hope of selling such blueprints to Governor Wike of Rivers State, “who not only have more revenue accruing to his state, but without anything to show for it.

“Certainly Governor El-Rufai has shown that improving the lives of his people matters the most to him and I will like to assure him of my unflinching and unalloyed support in any way possible in his noble objective in improving and uplifting the economic status of his state”, Eze said.