Zimbabwe’s flag at embassy in Abuja, at full-mast despite Mugabe’s demise 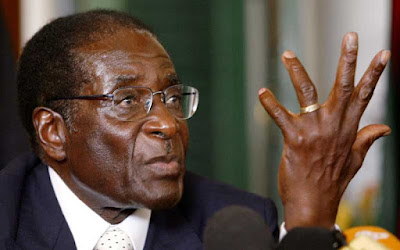 The flag of Zimbabwe at the country’s embassy in Abuja, on Saturday remained at full-mast, in spite of the death of the former President Robert Mugabe on Friday.

An official of the embassy, who pleaded anonymity, told the newsmen that no one was disposed to explain why the mast was still at full-mast.

The official, however, said that a condolence register would be opened on Monday Sept. 9, at the Embassy.

Meanwhile, there is no official report on when flags should be flown at half-mast across Zimbabwe in honour of Mugabe.


Mugabe, who was born on Feb. 21, 1924, at Kutama Mission village of Zvimba, Southern Rhodesian District, was the immediate past president of Zimbabwe, the country he ruled for 37 years.

Zimbabwe’s President Emerson Mnangagwa, in a national address on Friday, declared days of mourning until the late strong man of Zimbabwe was buried.

Mugabe, aged 95, died on Friday Morning in Singapore, after a protracted illness.

The flying of a flag at half-mast, was a global practice following the death of a principal figure of government, as a mark of respect and honour to the deceased’s memory.