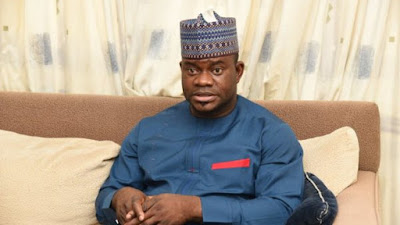 Yahaya Bello, governor of Kogi, says he fed Ahmadu Fintiri, Adamawa governor, when he came to preside over the primary election of the Peoples Democratic Party (PDP) in the state.

Bello said this in reaction to allegations by the PDP that he attempted to disrupt its primary election.

Speaking with journalists at the national secretariat of the All Progressives Congress (APC) in Abuja on Thursday, Bello said he ensured that PDP had a “level-playing field.”

The governor said he also made sure security was provided for the opposition party to conduct its exercise adding that “PDP shouldn’t make excuses for their inefficiency or for their brigandage.”

“I’m not a member of PDP. We gave a level-playing field to PDP and other political parties to carry out their activities freely within the State. They moved round the nooks and crannies, all the aspirants in other political parties moved round the nooks and crannies of Kogi state and we provided security for them and we ensured that they were secured and safe,” he said.

“In fact, let me tell you, my colleague, the governor of Adamawa state, his excellency Adamu Ahmadu Fintiri, who was the chairman of their primaries committee, before he came to Kogi state, he contacted me that he was coming to conduct the election.

“I provided his accommodation, his feeding and some other logistics within the state to ensure that they had hitch free election exercise. I conducted the security people round the Stadium and went round the stadium and my security chiefs in Kogi state were very excellent and up and doing as far as Kogi state is concerned.

“If they are attacking themselves again, why should anyone point an accusing finger on me. I think they should look inward and solve their problems.”