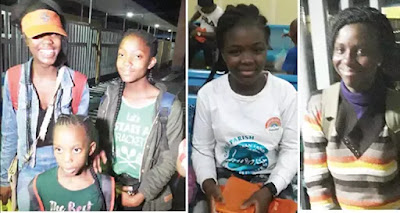 Up till 1 am in the early hours of Thursday, more than three hours after their arrival at the Murtala Muhammed International Airport, Ikeja, Lagos from South Africa, Richard Simon was full of life. He and his peers aged between four and six played gleefully inside the lighted pilgrims’ hall of the airport, racing against one another to catch a small round plastic object one of them threw up into the air. They showed no sign of sleeping soon.

Most of them are beginners in South African schools and could barely keep memories of the harsh treatment they and their parents went through in the Rainbow country in the wake of xenophobic attacks. To them, a return to their fatherland came with no hard feelings – at least for now. “I am happy to be here,” Simon quipped in response to our correspondent’s question as he ran after his playmate, Sandra, five, who was also chasing after the object.

But for older ones who are in their teens, returning home is a mixed tale of excitement and sadness, just as it is for their parents. While the parents lived in fears of imminent attacks by South African mobs, the children grappled with frequent discrimination among their native classmates who saw them as strangers.

Since xenophobia became pronounced in the country about three years ago, Ogechi Maduagwu, a Grade 8 pupil in Johannesburg, has been struggling hard to cope with the growing trauma of racism at the school that should have shielded her from social oppression. “My classmates from South Africa talk down to Nigerian pupils. They are racists. Anytime, we have a little misunderstanding and they are moody, they would tell us, ‘Go back to your country. We don’t need you here!’ It was that bad! She exclaimed, mimicking her bullies.


To her and many Nigerian pupils evacuated to the country on Wednesday night, it was a big break from the manacles of repression and the dawn of a new life. “I am happy to come back home,” the 13-year-old native of Imo State said amid hearty smiles.

Ogechi could not hide her excitement as she posed for photographs with her siblings, Ijoma, 16 and nine-year-old Ngozi, who are also returnees. With their relatives waiting outside the premises to receive them after documentation, they were elated that they would now live among the people who love and care for them.

She said, “I will miss my teachers and my friends from other countries. It’s sad for me to leave South Africa because of the quality of education I had there. But what is important is my safety. I was on scholarship which I had to forfeit because of this crisis. It’s really, really painful.”

Her elder sister, Ijoma, a Grade 11 pupil, confirmed the toxic relationship they endured in school at the hands of their South African counterparts. Other than the country’s educational system which she described as “perfect,” Ijoma had no regret relocating to Nigeria in the heat of dehumanising treatments she frequently went through.

“The crisis in town and the discrimination in my school have become unbearable. So my parents decided that my sisters and I should come back home to continue with our studies. We live in Johannesburg with our parents. People are dying and their shops are burnt. Our parents are still in South Africa. They will soon join us,” she revealed.

Chubby and cheerful, Oyinkansola Ogunfolaji sat on a long steel chair in the hall devouring a plate of rice she and other returnees were served. Like Ogechi and Ijoma, the 12-year-old Ogun State indigene was a victim of verbal assault in school. According to the Grade 7 pupil, the past three years of her schooling in Mabopane, a suburb of Pretoria, came with painful memories she could not easily erase.

Aside from her class teacher and her best friend whom she would probably miss dearly because of their role in mitigating the impact of the racist slurs on her, parting ways with her South African classmates was a moment she had wished, long before now.

“I was discriminated against because I am a Nigerian. It was only two people I could rely on in school – my class teacher and my best friend, who are South Africans. Any time a South African classmate bullied me, I looked up to them. They would give me good advice. My classmates would tell me they don’t need me in their country and that I should go back to my home (in Nigeria). They would say I am too black to be in South Africa,” she lamented, almost in tears.

Despite learning in such an unfriendly environment, the teenage girl did not let the resentment affect her studies. She consistently found inner strength amidst the rising hatred and devised intellectual means to get back at her oppressors.

“So far, I have won nine awards in subjects including Afrikaans, English, Mathematics, Economics and Management Sciences, Social Sciences and Life Skills. I feel bad because no one would remember me for my achievements and it would be like all my hard work has gone down the drain.

“Now that I am in Nigeria, I will try my best to cope here. My dad is not back yet. He wants to take care of our property there. We have a house and two cars. He has a shop where he sells refrigerators. He wants to sell everything because of the attacks so that he could also relocate back to Nigeria,” she added.