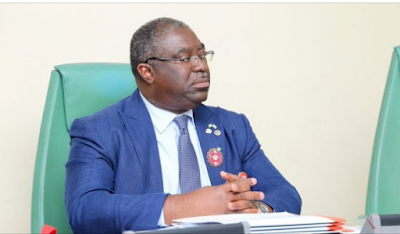 Timi Frank, a former deputy spokesperson of the All Progressives Congress (APC), had alleged that Osinbajo started having issues when the presidency discovered that he mismanaged N90 billion allegedly made available by the FIRS for 2019 election campaign purposes.

But in a statement on Monday, Wahab Gbadamosi, FIRS’ director of information, dismissed the claim, saying the service’s annual allocation is not even up to that amount.

“The attention of the Federal Inland Revenue Service, FIRS, has been drawn to publication in some online and daily newspapers by a certain Comrade Timi Frank, the former Deputy National Publicity Secretary of the All Progressives Congress (APC), who claimed that the FIRS supported the`APC, through the Vice President Yemi Osinbajo with a phantom N90 billion,” the statement read.

“The FIRS wishes to state as follows: 1. That the entire allegation being spread by one Frank Timi that the Federal Inland Revenue Service spent N90billion to fund the last election is mendacious, wicked, malicious and a calculated attempt to smear the image of the Service and that of his Excellency, the Vice President, Prof. Yemi Osinbajo. This campaign of calumny and villifying false claims are entirely, libellous, unfounded in fact, irresponsible and a brazen assault on the integrity of the Service as a responsible and accountable organisation and demonstrates an abysmal ignorance of the budgetary and expenditure process of the FIRS.

“That in the last four years since Mr. Tunde Fowler has supervised operations at the FIRS, the agency had not received up to N100 billion, per annum, as Cost of Collection from the Federation Accounts Allocation Committee, FAAC. FAAC is a public institution, whose records are open to the public.

“That it is from the remittances from FAAC—which had never grossed up to N100 billion, PER ANNUM, that FIRS pays the salary and emoluments and trains it’s over 8000 staff, runs over 150 offices and provides for other needs of the Service.

“That given the above, IT IS NOT PLAUSIBLE nor DOES IT MAKE ANY SENSE that FIRS will commit its resources to a phantom campaign of N90 billion as suggested by Mr. Timi Frank and FIRS does not fund political associations.

FIRS said it is a public trust which operates on behalf of Nigerians, accusing Frank of mischief.

“That FIRS is a creation of statute and its activities are governed by the laws of the Federal Republic of Nigeria and financials regulations and thus, IT IS NOT PLAUSIBLE, that its funds could be expended in such a cavalier manner as suggested by Mr. Timi Frank,” the agency said.

“That FIRS Budget and expenditure approval processes pass through the Budget Office and the Ministry of Finance, before such are presented to the National Assembly for Appropriation into Law. The National Assembly committees, consisting of all parties and inclinations exercise oversight function on all agencies of the Federal Government to ensure agencies keep to the letters of the Appropriation Act. Thus FIRS’ operations are subjected to
Scrutiny and close monitoring by the National Assembly, the Federation Accounts Allocation Committee and the Ministry of Finance.”

FIRS demanded an apology from Frank, threatening to sue him for libel if he ends up not acceding to its request within 24 hours.