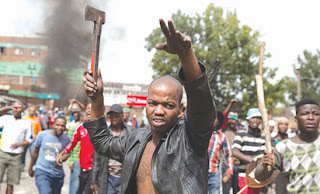 South Africa’s Minister of International Relation and Cooperation, Dr Naledi Pandor has blamed drug dealers for xenophobic attacks on Nigerians and pleaded with the Federal Government of Nigeria to assist her country by preventing Nigerians dealing in narcotics from coming to South Africa.

Pandor, who spoke with an interview with an online news platform, enca.com, on the sidelines of the ongoing World Economic Forum on Africa on Thursday, said there was a widely held belief that many Nigerians in South Africa dealt in drugs, adding that the Federal Government should help to address this issue.

Pandor in the interview with enca.com said the South Africa authorities were aware that the attacks against foreigners were driven by what she called “Afrophobia.”

The minister said, ”I would appreciate them (Nigerian government) in helping us as well to address the belief our people have, the reality that there are many persons from Nigeria who are dealing in drugs in our country, who are harming our young people by making drugs easily available to them.
“I believe Nigerian nationals are involved in human trafficking and other abusive practices. This kind of assistance of ensuring such persons don’t come to our country would be of great assistance to our nation.”

The minister cast doubts on the proposal suggesting that Nigerian police officers should be embedded with the South Africa Police Service to assist them in preventing xenophobic attacks against Nigerians.

Pandor said she was not aware of any South African law that permitted the implementation of the idea.

She added, “I had an interview and one of the interviewers, a journalist from Nigeria; he was repeating some of the statements that Nigeria’s Foreign Affairs Minister (Geoffrey Onyeama) had made.

“Part of it being that their security forces should come to South Africa to somewhat work alongside with our police and I indicated that I don’t know any provision in the constitution or our law which would allow that.”

The minister described the attacks as a complex phenomenon “whose root causes were not easy to define.”