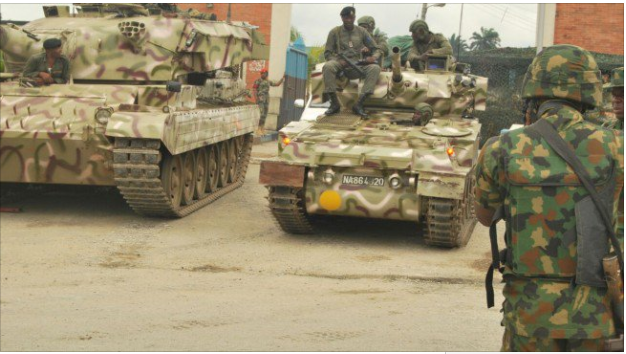 Some military commanders engaged in the fight against Boko Haram say the Nigerian army uses outdated weapons to fight the insurgents who often deploy sophisticated weapons during battle.

The weapons used by the troops are said to be from the Soviet Union era, and some were procured during the era of former president Shehu Shagari, which was between 1979 and 1983.

In 2018, TheCable investigated how soldiers deployed to fight Boko Haram wear slippers to the battlefront, beg for food, and sleep in classrooms.

This is despite the federal government’s allocation of over N3.77trillion to the ministry of defence in the past 10 years.

According to the PUNCH, the commanders who spoke on condition of anonymity, said the lack of sophisticated weapons has exposed Nigerian troops at the battlefront to attacks by the insurgents, especially ISWAP fighters.

One of the commanders said the troops still use shilka guns acquired during the era of Shagari.

“The Shilka guns were acquired under Shagari’s government. We have many of them but they are outdated, so they were refurbished, even though a lot of their components are missing. However, they were deployed in the North-East for the anti-insurgency war like that, hence they fail during battles,” he said.

“Recently, Boko Haram even stole one from the troops. So, while we are battling with the refurbished Shilka, ISWAP fighters deploy the latest technology to attack us, and you know the President said a week ago at an ECOWAS meeting that how the terrorists deploy more sophisticated weapons is a matter of concern.”

Another commander said the troops used to have in their inventory Tank 72, also known as T-72, which was made in Russia and manufactured in 1971 but sold out in 1972.

He said T-72, which are Soviet-era tanks, were acquired during the regime of former president Goodluck Jonathan.

“They were procured by former President Goodluck Jonathan’s administration towards the 2015 elections and they were used to capture lost territories, but unfortunately, the tanks came without spare parts,” he said.

“From time to time, we cannibalised one to fix another until they broke down and they were withdrawn from operations because there were no spare parts. What we have now is called  Vickers MBT (Vickers Main Battle Tanks).

“They are even older than the T-72. So, as I’m talking to you, Shilka is what we have and the outdated guns we were supplied with and that is why the insurgents seem to be having the upper hand. The equipment is really outdated.”

Boko Haram has launched daring attacks on both the military and civilians.

President Muhammadu Buhari had told West African leaders during the extraordinary summit of ECOWAS heads of state and government on counter-terrorism, that the ease with which terrorist groups, including Boko Haram, access funds and acquire sophisticated weapons is a serious concern.