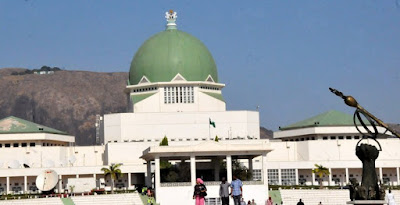 Three former federal lawmakers risk being imprisoned following their refusal to honour Supreme Court judgements ordering them to return some monies to the National Assembly.

The court in 2017 awarded judgement debts against Abubakar Danladi, then a senator, Herman Hembe and Sopuluchukwu Ezeonwuka, both members of the House of Representatives as at that time.

In separate judgements by the apex courts, each of the federal lawmakers was sacked and ordered to return all salaries and allowances they had received while in the National Assembly.

However, two years after the judgement, none of them has refunded the money.

Although the National Assembly has refused to release information about the enforcement of the judgement, multiple sources told this newspaper that none of the lawmakers honoured the judgement.

In total, the politicians are expected to return about N62 million to the coffers of government. 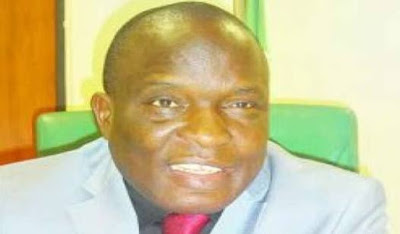 The lawmaker who had spent 22 months at the National Assembly then was sacked by the court and replaced with Ben Nwankwo.

Mr Nwankwo had approached the court on the argument that his name was wrongly substituted with that of Mr Ezeonwuka after he had obtained the nomination of the party to contest the National Assembly election.

Prior to this judgement, the candidacy of Mr Sopuluchukwu of the Peoples Democratic Party (PDP) was upheld by the Federal High Court in Abuja and the Court Appeal

Dissatisfied with the judgements, Mr Nwankwo approached the Supreme Court.

Justice Kudirat Kekere-Ekun who read the judgement. set aside the judgement of the Court of Appeal delivered on June 26, 2016, as a nullity. Thee apex court ruled that the appellate court exceeded its jurisdiction by granting relief not sought by the parties before it.

In doing this, the court sacked Mr Sopuluchukwu and ordered the second respondent (INEC) to issue Mr Nwankwo the certificate of return.

“It is further ordered that Ezeonwuka shall refund to the National Assembly all monies collected by him by way of salaries and allowances since he took the seat within 90 days.
“And finally, a fine of N500, 000 is awarded in favour of the appellant against the first respondent’’, the judge held.

By the time this judgement was delivered, Mr Sopuluchukwu had spent 22 months at the House of Representatives.

According to the Revenue Mobilisation and Fiscal Commission (RMAFC) approved emolument for Rep members, Mr Sopuluchukwu was to return N794, 085 he received monthly for 22 months.

The RMAFC determines the remuneration of political office holders, both elected and appointed, from the national level to the local government level.

Going by the salary and allowances prescribed for his position by the commission, the lawmaker was expected to return N17, 469, 870 within 90 days after the judgement was delivered.

Checks conducted at the Finance Department of the National Assembly in September 2017 indicated that the lawmaker was yet to return the money five months after judgement.

However, the situation remains the same over two years after.

When contacted, Mr Sopuluchukwu confirmed to this reporter that the Supreme Court judgement was not implemented but said he had ‘settled’ with the National Assembly. He would not reveal the nature of the settlement.

“Are you aware that there are other judgements? About three of us. Hembe…have they returned their own? It is a general thing. They treated it equally, if they have returned, all of us have returned.

“What is the rationale behind asking me to return the money expended when I was working? Allowances, did I put it in my pocket? Is it not when you’re working that you use it to work? In this country, where have you seen a judgement that after removing a governor he (is asked) to pay all the money he received? Have you seen it?

Herman Hembe
Two months after Mr Sopuluchukwu’s case, the Supreme Court sacked another House of Representatives member, Herman Hembe. The court ruled that he was not the valid candidate of the All Progressives Congress. 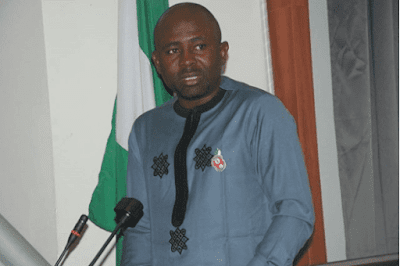 RepresentingVandikwa/ Konshisha Federal Constituency of Benue State, Mr Hembe was replaced by Dorathy Mato, who was declared the rightful winner of the APC primaries.

Mr Hembe was also ordered to return all the salaries and allowances he received as a lawmaker since he was sworn in in 2015. The Supreme Court also awarded one million naira against Mr Hembe in favour of Dorathy Mato, the defendant.

After the judgement, Mr Hembe approached the Supreme Court asking the court to refer the case to a lower court for retrial. His prayer was not granted.

“I have however been unable to refund the salaries I received from the House of Representatives. The salaries were received monthly and were used for the upkeep of my family and the high cost of living made it impossible for me to have any savings. 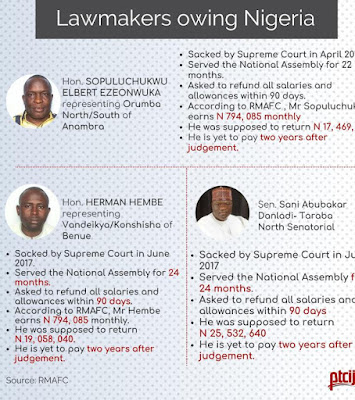 Checks by this newspaper indicate that the lawmaker has not returned N19,058, 040 received in the 24 months he spent as a lawmaker. He has also not paid the N1 million fine.

For several days, Mr Hembe did not answer multiple calls put through to his line. He also did not reply to text messages.

In a telephone conversation, Mrs Mato said the one million Naira fine awarded in her favour has not been paid.

Abubakar Danladi
Mr Danladi was sacked the same day as Mr Hembe and asked to refund what he had earned for 24 months as a Senator.

By RMAFC standard, Mr Danladi, who represented Taraba North Senatorial District until his sack, is expected to return N25, 532, 640 to the National Assembly within 90 days of delivery of the judgement.

However, multiple sources revealed that Mr Danladi is yet to refund the money.

Lawmakers risk jail terms
The Sheriff and Civil Process Act guides judgement debt in Nigeria. The Act allows the creditor, in this case; the National Assembly, several options in enforcing a judgment debt.

First, the Act under Section 20 (1) provides an option for the creditor to apply for execution whereby the properties of the debtor can be sold.

“Any sum of money payable under a judgment of a court may be recovered, in case of default or failure of payment thereof forthwith or at the time or times and in the manner thereby directed, by execution against the goods and chattels and the immovable property of the judgment debtor in accordance with the provisions of this Act.”

The creditor can also apply for Garnishee process. With this, a judgment creditor (garnishor) can obtain an order of the court attaching some money in the hands of a third party like the bank, (garnishee) which belongs to the judgment debtor.

Such order compels the garnishee to pay over such funds to the garnishor to satisfy the judgment debtor’s indebtedness.

Also, there is the option of committal of the debtor to prison. The sheriff, under Section 38 (1) of the Act, is empowered to “take the body of the person against whom the order is made or warrant issued, and deliver him to the officer in charge of the prison mentioned in the order or warrant.”

This can only be effective after a court at the conclusion of an investigation directs so. Such debtor may be committed to prison and discharged after presenting a certificate signed by the creditor or by any officer of the court, to the effect that such person has satisfied the debt or instalment.

As stated in section 68 and 69 of the Act, the court after the hearing has the power to send such defaulters to prison terms for contempt of court.

“If such judgment debtor does not show cause to the satisfaction of the court why he should not be punished, or if being ordered to show cause as aforesaid he does not attend the court and does not establish sufficient reason for not attending, the court may remand the judgment debtor to prison if he has been already arrested, or issue a warrant for his arrest and commitment as for a contempt of court.

Section 76 of the Act notes that imprisonment does not extinguish the debt.

However, to enforce any of these, the court has to receive a formal application from the creditor.

“The Attorney-General of the Federation can enforce that judgement because it is public fund. On the strength of that judgement, the AGF can take an application to the High Court and file for action for an attachment of the property of the debtors. The sheriff of the lower court will attach the properties and pay to the coffers. But somebody must draw the attention of the AGF to it because he’s not a party,” Mr Alabi said.

He said even though the law does not disallow settlement between parties, the National Assembly needs to make public the terms of the settlement “if such actually exist.’ He added that there are many consequences for the affected lawmakers.

“They are owing the state. If they want to vie for any elective post now, the judgement can be brought out to show that they are bankrupt. On the strength of that argument, they cannot represent anybody. They are in contempt of the highest court of the land.

“A party who is in contempt of a court does not have any right to get anything from that court. In other words, if the court directs you to comply with a judgement and you fail to do so, the court may refuse to listen to you in another matter,” he said.

On July 11, this newspaper under the empowerment of the Freedom of Information (FOI) Act wrote the Clerk to the National Assembly, Sani-Omolori, to request for details and evidence of the payment by the lawmakers.

This newspaper also requested for details of official communication by defaulting lawmakers, if any, and moves made by the parliament to enforce judgements.

The letter was acknowledged the same day and replied on the 19th of the same month. In the reply signed by Charles Yiola, Secretary, Directorate of Legal Services, the National Assembly requested more time to respond.

“I am also directed to inform you that your request requires consultations with the Courts, Parties, various Directorates of the National Assembly, the Federal Treasury Office and other offices. National Assembly was also not a party to the suit and needs to verify your claims. Time is therefore extended by one month to answer to your application,” the response reads.

The Clerk to the National Assembly is yet to respond to an email enquiry as at the time of filing this report.