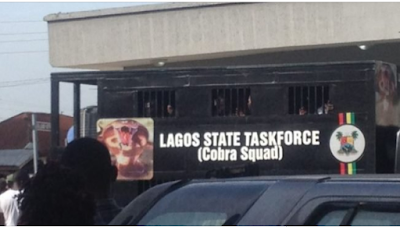 The Lagos police command has released the 123 men who were intercepted along Moshalashi road, Agege on Friday.

The State Environment Sanitation and Special Offenses Taskforce had intercepted a truck conveying the men who said they were coming from Jigawa on Saturday.

The truck was also reported to have been laden with 48 motorcycles.

Yinka Egbeyemi, chairman of the task force, had said the truck was seized following a tip-off by members of the public who raised security concern about the manner with which its occupants “conducted themselves”.

Thereafter, they were moved to the office of the task force in Oshodi for interrogation.

However, Bala Elkana, police public relations officer,  in a statement, said the vehicle and passengers were searched but nothing incriminating was found.

“They were profiled with a view to ascertaining who they were, where they come from, their background and their mission in Lagos,” Elkana said.

“They all came from Jigawa State, North West Region of Nigeria and are mostly artisans, commercial motorcyclists and traders.

“Some of them are already based in Lagos with their families while others are coming for the first time. They are in the state in pursuit of greener pasture.”

He said the police was satisfied with their legitimate mission in the state and allowed them to proceed to their various destinations.

Elkana added that the police command would not relent on its efforts to protect the lives and properties in the state.