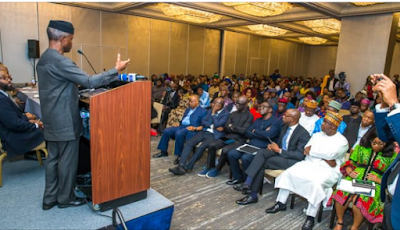 The Peoples Democratic Party (PDP) has called for a system-wide investigation into the alleged N90 billion the Federal Inland Revenue Service (FIRS) gave to Vice Presidet Yemi Osinbajo in the building of the 2019 general elections.

Frank Timi, a deputy spokesperson of the party, recently made the allegation in an interview. FIRS in a statement released last night, denied the allegation and asked Timi to tender an apology within 24 hours or face legal action.

In a statement released this evening, PDP says the allegations must be investigated as it is too heavy to overlook. Read the state signed by its publisity secretary, Kola Ologbondiyan, below

The Peoples Democratic Party (PDP) demands a system-wide investigation into the alleged siphoning of N90 billion from the coffers of the Federal Inland Revenue Service (FIRS) in which top members of the Buhari Presidency and All Progressives Congress (APC) have been mentioned.

The PDP demands that the Buhari Presidency must not cover this humongous corruption involving highly placed officers in this administration, as it had done in the past.

The party laments that in the face of excruciating hardship being endured by citizens, a government, which came into office on the mantra of change and zero tolerance for corruption, has become enmeshed in atrocious acts of corruption.

The PDP holds that it is pathetic and speaks volumes of the character of this administration that a top member of the cabinet is being fingered in this reprehensible siphoning of monies collected as taxes from millions of already impoverished Nigerians.

Our party notes that this shocking allegation directly borders on gross misconduct and breach of public trust.

The party therefore rejects the flimsy denials and threats being pushed through the FIRS as a belated attempt at cover-up by persons close to the Presidency.

It is therefore held that the delay by the Buhari Presidency in applying established statutory processes and procedures of ordering an investigation into the issue only goes to confirm that the Buhari administration is a citadel of corruption.

This is more so as reports are already in the public domain of how the money stolen from FIRS, was allegedly diverted to private purses and for other extraneous purposes including the 2019 extravagant campaigns of the APC.

Nigerians expect that all our national resources should always be used to ensure the welfare of the citizenry and must be accounted for at all times.