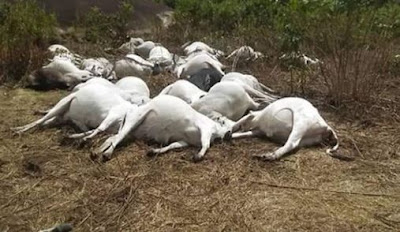 The Ondo State Government has dispatched heath workers to Ijare community in the Ifedore Local Government Area of the state to ascertain the cause of death of 36 cows in the town on Saturday.

The cows, owned by Fulani herdsmen, were reportedly killed by lightning while grazing on the ‘sacred’ Oke Owa hill in the community.

A veterinary officer in the Ministry of Agriculture, Dr Akinsorotan Akinbamidele, who is the leader of the team, said a committee would be set up to prevent a potential epidemic in the town after completing the delegation’s assignment.

The team held a meeting with the traditional ruler of the town, Oba Adebamigbe Oluwagbemigun, on the matter.


According to Akinbamidele, the fact-finding committee consists of security officials, officials of the Federal Department of Veterinary and Pest Control, the (state) ministries of agriculture and environmental sanitation service, as well as the representatives of the host community and Miyetti Allah.

He warned the people not go to the scene of the incident to avoid contracting diseases.

The traditional ruler said the animals were killed by lightning because the gods were angry that they entered the ‘sacred’ hill.

Oba Oluwagbemigun said, “Such a thing has never happened since I assumed the throne 22 years ago. The villagers and the herders have been living peacefully together.

“Nobody was aware that such had happened until the following morning when a hunter, who went to check his trap, came to inform us about the unfortunate incident.

“Although when it started raining in the early hours of Saturday, we heard the sound of thunder four times, but we never envisaged it could happen because we did not believe anybody could go there.

“Even as the king of Ijare, I only go there once in a year after appeasing the gods. It is a sacred place that no one dares. A few days ago, Miyetti Allah leader in this local government came to my palace and also said that it was a lightning strike and that the owner of the cows was aware.”

The monarch, who urged the villagers to go about their normal business without fomenting any trouble, appealed to the state government to expedite action on how to remove the dead cows.