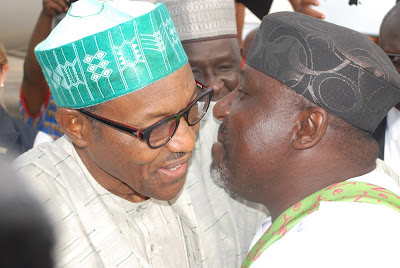 Former Governor of Imo State and Senator representing Imo West Senatorial District, Rochas Okorocha has described the Tribunal judgment that affirmed the election of President Muhammadu Buhari as victory for lovers of democracy.

Okorocha who congratulated the President in a statement signed by his Media Adviser, Mr. Sam Onwuemeodo, said that the victory will spur the President to do more.

According to the statement, “with the victory, President Buhari would now be more encouraged to continue to work for the unity, progress and peace of the nation, while the distractions associated with the case while it lasted have now been jettisoned”.


The former governor commended members of the Tribunal for “doing a good job and making the nation proud”.

He also commended Atiku Abubakar, the People’s Democratic Party’s candidate for “giving good account of himself and for his contributions to the nation’s democracy”.

Okorocha noted that with all these, there is light at the end of the tunnel for the nation’s democracy.

Also hailing the judgment, the member representing Ohaji-Egbema/Oguta/Oru West Federal Constituency, Hon Kingsley Uju, said that judiciary has once more proved to be the beacon of the nation’s democracy.

He commended all the parties for reposing confidence in the judiciary, adding that the petitions and the processes of the Court will further strengthen the electoral process.