Obaseki removed the only commissioner I nominated into his cabinet -Oshiomhole 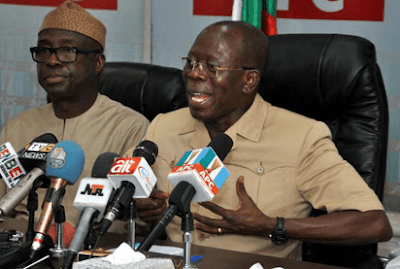 Adams Oshiomhole, national chairman of the All Progressives Congress (APC), says Godwin Obaseki, governor of Edo state, removed the only commissioner he nominated into his cabinet.

In an interview with Channels Television, Oshiomhole said the governor took the action after a reconciliatory meeting between him and his successor.

He said four other governors attended the meeting.

The duo have been in the news in recent times over the crisis in the Edo. The misunderstanding between them led to a split in the Edo house of assembly.

A faction of the assembly is said to be loyal to the governor while the other is on the side of the APC national chairman.

There are reports that both men fell apart as a result of Oshiomhole’s opposition to the governor’s reelection bid but the APC chairman told Channels that he has nothing to gain by opposing the governor’s second term ambition.

“We have no argument over money or appointment… In the meeting we held with four governors, including Governor Bagudu, I asked the governor, how many commissioners did I nominate in your cabinet. He agreed that I only nominated one person out of more than 20 commissioners,” Oshiomhole said.

“Not many Nigerians will believe that because for me I was out of government and I have convinced myself that the day I step out of government, that is it. After that first meeting, the governor decided to remove that one commissioner along with seven others. But that is not my business.

“The governor can never tell you that I have interfered in his choice of projects and so on. The only thing I feel a bit worried about is that some of the projects we started together have been abandoned. There is no way to solve disagreements without talking to the aggrieved parties.

“Let me assure you. This governor is not under threat. It is those who make money from crisis, those I call merchants of confusion, who can tell the governor that he wants to be impeached. What will I gain if Godwin does not run a second term?”