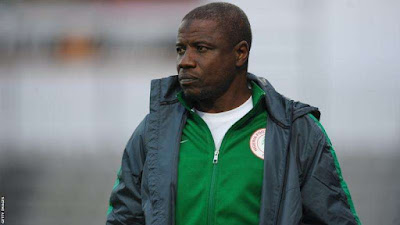 The Nigeria Football Federation has reinstated Salisu Yusuf to the national team after serving a one-year ban for receiving bribe.

The NFF made this known in a press statement by its spokesperson, Ademola Olajire, on Thursday.

Salisu was in August 2018 caught on camera accepting cash from men who posed as football agents to select two players for his Morocco 2018 African Nations Championship squad.

He was ordered to pay a fine of $5,000 by the federation after the NFF Ethics and Fair Play Committee ruled that the coach received   $1,000  from the men.


Though the NFF didn’t state that Salisu would take over as the Eagles coach, the federation bade coach Imama Amapakabo farewell.

Imama was Salisu’s assistant in the U-23 national team and the CHAN team before the ban.

In the absence of Salisu, Imama led the U-23 Eagles to qualify for the 2019 U-23 Africa Cup of Nations after defeating Sudan 5-0 in Asaba on Tuesday.

With Salisu’s return, Imama is expected to return to his position as an assistant coach of the U-23 team.

Announcing Salisu’s return on Thursday, NFF said, “The federation has noted that the Chief Coach of the Super Eagles, Salisu Yusuf, has now fully served the one-year suspension clamped on him last year.

“The federation thanked coach Imama Amapakabo for his sterling efforts while in charge of the U-23 National Team in the absence of the suspended Yusuf, and for eventually seeing to the team’s qualification for the U-23 AFCON.”