Nadal defeat at US Open will teach me, says Berrettini 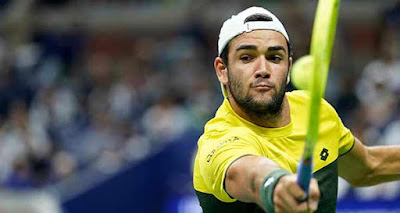 Matteo Berrettini pledged to learn from Friday’s US Open semi-final defeat by Rafael Nadal and use those lessons to help him return to the latter stages at future Grand Slam tournaments.

Italian Berrettini paid a steep price for wasting two set points in the first set as 18-time major champion Nadal roared back to claim a 7-6 (8/6), 6-4, 6-1 victory.

“Winning the first set would have mean I think a lot. Especially with him, it’s tough to go a set down after an hour, more than an hour,” Berrettini said.

“But I was feeling I was playing really good, even though he had a lot of chances on my serve. I think I played also good important points.


“I mean, I was brave like I asked to myself. I couldn’t say anything bad. I cannot complain about what I did. I was playing with Rafa, centre court, in semis. I think it’s OK.”

Berrettini, the first Italian man in the US Open semi-finals since Corrado Barazzutti in 1977, was trying to follow the footsteps of the only Italian men’s Slam winner — Adriano Panatta at the 1976 French Open.

At 23, Berrettini rode his powerful serve and blistering forehand to become the youngest US Open men’s semifinalist since Novak Djokovic in 2010.

He was appearing in just his eighth Grand Slam main draw and admitted he is far from the finished article.

“I’m still learning tennis. It’s really weird. I was coming here with not a lot of confidence. I was injured. I didn’t play a good match in Cincinnati. Didn’t expect to do such a great tournament,” Berrettini said.

“I’m learning to be ready. Every match is important. Every point is important. This one for sure. Then all the matches, you have to be the focus and ready to get the chances that you’re making.

“I think when I have the right attitude on the court, I can play with any guys. If I’m focusing, if I’m playing my tennis, I can be really dangerous. That’s really important to have this confidence.”

Berrettini put up a far better fight against Nadal than he did when he lost 6-1, 6-2, 6-2 to Roger Federer in the fourth round at Wimbledon in July, his best Slam showing prior to the US Open.

“Last time I played one of the Big Three it didn’t go like that well,” he recalled.

“The feelings I had on the court for sure was an unbelievable experience. I didn’t have so many chances. I think I learned a lot from the match in Wimbledon.

“I was more ready. I was feeling also that the next time I’m going to play Rafa, I’ll be more ready because I didn’t ever play him even in practice.

“I didn’t know what to expect a lot. I think this match will help me a lot to improve my tennis, my everything, and for sure be ready for him the next time.”