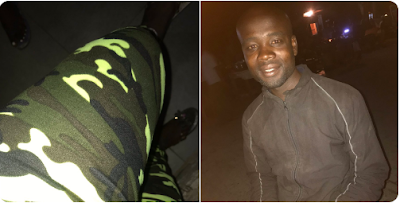 It is common to hear stories of Nigerian civilian getting into trouble with military personnel for wearing anything that looks like the camo which is officially worn by these uniform men and this story is no different.

Twitter user, @mideice_ recently narrated her experience with a soldier at CMS in Lagos, who stopped the bike she was riding on, after sighting her wearing a camouflage leggings. According to the series of tweets, he asked that she followed him on his bike.

Although resisting at first, she eventually followed him out of fear of what he would do. The soldier later rode into a dark corner and tried to molest her. Luckily for her, her bike man, who had ridden behind them, came to her rescue and confronted the soldier.

My bike man was also surprised so he said I should follow his own bike 😯😳 I was like oga where to? He didn’t say anything Nd I instead am going no where with him until this animal brought out koboko Nd started threatening me and my bike man
— yhourCupOfTee🌸✨🍭 (@mideice_) September 12, 2019

He now told me to drop I did while my bike man was hiding behind us that was how I started crying this oloribu was about to touch me before my bike man came outside from his hideout Nd confront him
— yhourCupOfTee🌸✨🍭 (@mideice_) September 12, 2019