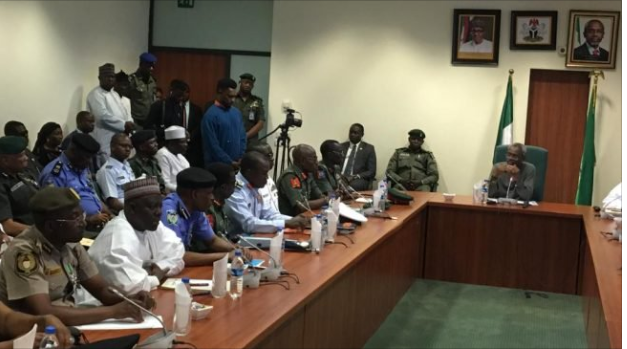 Femi Gbajabiamila, speaker of the house of representatives, says he will report the service chiefs to President Muhammadu Buhari for failing to honour an invitation to a meeting on security.

The service chiefs were absent at the meeting scheduled to take place at the National Assembly Complex on Friday.

Gbajabiamila said it was unfortunate and embarrassing that the leadership of the lower legislative chamber will convene a meeting to discuss Nigeria’s security challenges and the service chiefs will snub it.

He was particularly furious with the chiefs of the army and the air force, who sent accountants to the meeting.

“I am almost embarrassed to tell you the truth. There was no call placed to my office to explain why, just sending accountants and representatives,” the speaker, who was angry, said.

“We will postpone this meeting till Monday morning, I will personally see the president myself because we are supposed to work as one.

“I know some of these chiefs were somewhere yesterday night, I’m aware of that. It shows the disdain for this institution.

“I don’t know of any parliament in the world where the head of parliament will call the service chiefs on a nagging problem on how to resolve it and you won’t show up.”

Idris Wase, deputy speaker, said he is insulted by he absence of the service chiefs.

“I am insulted and feel insulted that this institution will make a proclamation, ‘come let us discuss our problems’ and the people in charge are not here,” he said.

“If the presiding officer will make a call and those responsible do not come, what will now become of the standing committees.

“As I was coming in, I saw one of the service chiefs going to Zuba, we crossed our way. There has to be a reprimand and we need to let the president know of that.”