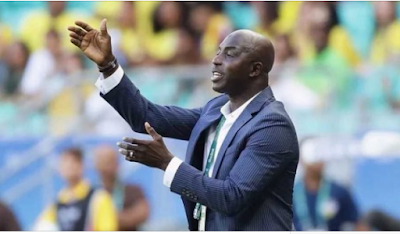 Samson Siasia, a former Super Eagles player and coach, says he feels abandoned by the federal government after his mother’s kidnap.

Ogere Betty was kidnapped on July 15 at her Odoni residence in Sagbama, Bayelsa state.

The 76-year old previously been kidnapped in November 2015 and regained her freedom 13 days later.

Siasia said that he is disappointed in Seriake Dickson, Bayelsa state governor, over his nonchalant attitude towards the abduction of his mother.

“I feel abandoned. I am on my own,” Siasia said.

“Bayelsa state government is not doing anything. I am so disappointed with the governor.

“I think he doesn’t care about anybody in Bayelsa state. He has not called me or ask me any question concerning the kidnap of my mother. That’s so sad.

“Something is going on in his state and he can not even do something about it. He has not said a word till today as we speak.

“Federal government has not done anything too. I went to pay the minister of youth and sports development a visit, he was on seat but sent a message across that he will call me later because he was attending to some other people.

“He has not called me back until now.”

Despite paying N1.5 million naira ransom fee to kidnappers in Bayelsa for the release of his mother three weeks ago, Siasia said his mother has not released.

Beauty Ogere and two others were kidnapped ten weeks ago.

“My cousin’s mother-in-law was also abducted from the beginning. For the past two months, my mother has been there.

“So, about three weeks ago we sent someone with 1.5million which they agreed to accept. And when he got there, they said we are playing with them.

“They released my cousin’s mother-in-law. So, it was like a swap. So, the guy is there now. With this development, we don’t even trust them with whatever they are saying anymore.

MINISTER: RELEVANT AGENCIES ARE WORKING ON IT
Reacting to appeals made on Twitter by some Nigerians, Sunday Dare, the minister for youth and sports and development, said relevant agencies are working on the case.

“I just arrived New York and noted conversations around SiaSia. I recall he came to visit me but I was unavailable. I subsequently sent him a sorry note to which he responded. The relevant agencies are at work. We hope they yield results as they have on many previous occasions.

“Our prayers are with SiaSia and his family over these developments. SiaSia served the country well. A football veteran no doubt.”