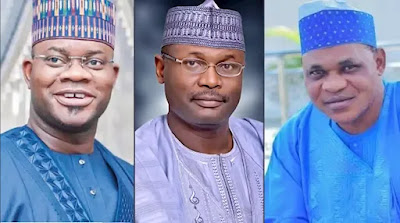 In this piece, ADELANI ADEPEGBA and GBENGA ODOGUN write that intra-party conflict, ethnic rivalry, among others, will determine the next occupant of the Lord Lugard Government House in Kogi State

The political tension in Kogi State is steadily rising as preparations for the governorship election increase at a frenetic pace. Already, the Independent National Electoral Commission has fixed November 16 for the poll in the state prompting a beehive of political activities.

Many candidates have thrown their hats into the ring as the fever to unseat the incumbent governor, Yahaya Bello, sweeps across the various political camps like an epidemic.


The general consensus, however, is that the election will be a straight fight between the APC and the PDP.

The incumbent, Bello, emerged the standard-bearer of the APC last Thursday.

He polled 3,224 votes to emerge the winner in a primary contested by 10 aspirants.

The governor was followed by Dr Babatunde Irukera who polled 109 votes to come second, while Hassan Bewa polled 44 votes.

Announcing the results, Governor Badaru Abubakar of Jigawa State, who was the returning officer, urged delegates to accept the result of the election in good faith. He put the total number of delegates at 3,500.

However, two of the contestants expressed dissatisfaction with the conduct of the poll.

Irukera said that the election was fraught with irregularities, noting that the exercise fell short of acceptable norms.

Bewa, who staged a walkout from the Confluence Stadium, Lokoja, the venue of the primary, alleged that the primary had been compromised.

Bewa, a serving member of the House of Representatives representing the Dekina /Bassa Federal Constituency, said he could not cope with the high level of manipulation at the primary election venue.

The lawmaker said he was taken aback when nearly all the delegates claimed to be illiterates, a situation he alleged forced electoral officials to issue them customised ballot paper with Bello’s name on them.

He said that all efforts to complain to the officials fell on deaf ears while security officials chased him away.

Bewa said he had started a consultation with his supporters and would communicate his decision in due course.

Meanwhile, Mustapha Audu, one of the aspirants who was disqualified at the screening stage, said his disqualification was a “fraud” by the party authority in connivance with some members.

He accused the APC National Chairman, Adams Oshiomhole, of doing the bidding of Bello instead of ensuring a level playing field for the aspirants.

He said what happened in Rivers State would repeat itself in Kogi State as he was set to challenge the party’s decision in court.

For the PDP, the younger brother of ex-governor Idris Wada, Musa Wada, emerged as its standard-bearer during a primary that held in the state on Tuesday.

Over 20 candidates of the PDP had indicated interest in the race. The main opposition party later cleared 13 contestants.

The PDP on Wednesday accused Bello of being behind a major gun attack that occurred during its Tuesday primary.

Following this development, however, Idris who is the son of a former governor, is expected to contest the governorship of the state with the incumbent, Bello, on November 16 this year.

According to keen observers, the contest is going to be fierce between both candidates.

Meanwhile, political analysts have hinged the smooth conduct of the November 16 governorship poll on certain factors which every savvy politician in the state cannot take for granted.

Findings show that violence and money will have a big impact on the poll. There are speculations that some top candidates are banking on thugs to intimidate voters and make it easy for the rigging of the election.

This may be dismissed with a wave of the hand, but elections in Kogi State have always been characterised by violence and there is little evidence that the situation will be different this time round .

Opinion leaders in the state say vote-buying may to a large extent determine the outcome of the poll in certain senatorial districts.

Citing the incidents of vote-buying during the last general elections in the state and other parts of the country, analysts say citizens who have become more impoverished in the last four years may not pass up the opportunity to line their pockets if offered money for votes.

Speaking on condition of anonymity, a senior Kogi State official says, “Four factors will determine the outcome of the election; the first is the supernatural factor which no one could explain, but which has characterised the election of the past three or four governors. If you go through the political history of the state, you can easily trace the curious and strange ways the past governors, including the incumbent, emerged.”

The official also notes that huge amounts of money will be released by the major contenders, stressing that “without huge financial muscle, it is difficult to win elections in Kogi State.”

The other factors, he says, include the ethnic affiliation of the candidates.

It is widely believed that the age-long distrust and cleavages between the different ethnic groups in the state may be further widened and exploited by candidates desperate for votes.

The majority Igala, Ebira and Okun ethnic groups have been angling to have their son or daughter in the Government House. While the Ebira are hoping their son, Bello, will retain his seat, the Igala would support any Igala native who emerged as a party candidate.

Melaye would have banked on the support of his Okun people and the Kogi West senatorial zone to cruise to electoral victory if he won the PDP ticket.

Being the only contestant from Kogi West, analysts believe this would have given the controversial senator the upper hand as he might have had block votes from the zone. However, he is expected to garner these votes for the party’s standard-bearer, Idris.

For Bello who became governor by a whim of fate about four years ago, his inability to manage the crisis in the ruling APC in the state may become his Achilles heel.

The governor was said to have alienated his erstwhile supporters in the APC and across the state by his alleged poor performance. The division in the party is expected to play a major role in the outcome of the poll, which is just about nine weeks away.

Although he has positioned himself as President Muhammadu Buhari’s “boy” by consistently defending the policies and programmes of the government at the centre, no matter how controversial or ludicrous, the changing political scenarios show that the governor may have lost his acclaimed supporter in the Presidential Villa.

Bello received a reality check recently when his ministerial nominee reportedly failed to get the President’s nod.

This, political watchers say, indicate that the young governor may have been abandoned to fight his battle alone without federal support.

Though he successfully corralled the state traditional rulers led by the Attah Igala, Dr Michael Oboni, to woo Buhari to endorse his candidacy for another term in office, the gambit apparently failed to achieve its intended objective.

The spokesperson for the Kogi State Traditional Rulers, Solomon Owoniyi, told State House correspondents that their meeting with the President was to seek his support for Bello’s second term bid and to plead for a substantive minister for Kogi State.

But the monarchs returned to Lokoja empty-handed as they did not secure any commitment from Buhari.

To further compound his problem, Bello had been engaged in a tug of war with his deputy, Simon Achuba .

The deputy governor has accused Bello of planning to assassinate him, but the governor has denied the allegation.

Following the alarm by Achuba, Bello’s loyalists in the state House of Assembly said they had commenced impeachment proceedings against the deputy governor.

Findings indicate that the deputy governor may have joined forces with those working to thwart Bello’s second term ambition.

Achuba reportedly visited the Audus about two weeks ago where strategies and synergies about the looming political war were discussed.

Against the backdrop of the Kogi monarchs’ visit to the Presidential Villa, an Igala socio-cultural organisation, “Ukomu Igala”, rejected the ambition of the governor and also flayed him for dragging the traditional rulers into politics.

The leader of the group, Mr Samuel Salifu, knocked Bello for failing to meet the people’s expectations.

Also, the Executive Director, Conscience for Human Rights and Conflict Resolution, Abdul Miliki, has said that party candidates have to fight to win the coming election.

“Kogi doesn’t have power brokers and that is why politics is interesting in this state. Everybody is on his own. If you look at Kogi Central, where the governor is from, he is also a contestant. If you go to the West, there is nobody that can also dictate the pace and even in Kogi East, there is no clear power broker,” Miliki notes.

The CHRCR director emphasises the influence of money and violence in the forthcoming elections, adding that his organisation is monitoring the situation as the political temperature heats up.

He explains, “The outcome of the primaries will influence the election. The coast will be clear by the end of September when all primaries would have held, and court cases settled. Money would play a prominent role than individuals. Kogi election is always violent; we have our flashpoints and we have a template to monitor electoral violence.”

Speaking on the number of candidates, a political analyst, Prof. Abubakar Ali, notes that the situation is not new, hinting that it may, however, impact negatively on the outcome of the election particularly in Kogi East.

“A similar scenario played out in 2015 and the outcome of the election is now history,” he submits.

The November 16 poll is just at the corner and Kogi residents can only witness intense politicking ahead of this date.  Political analysts insist it is too early to tell who the winner will be.