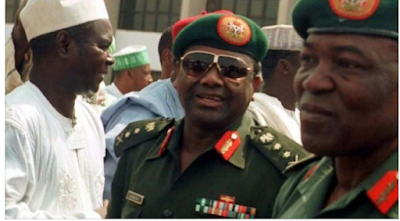 The Abacha family thought they had done Nigeria a favour by giving up $1.3 billion but the Goodluck Jonathan administration soon discovered that they still had $1 billion hidden in various accounts in Europe, according to Mohammed Bello Adoke.

Using the Nigerian legal system, Mohammed Abacha, the eldest surviving son of the late head of state, had tried to stop the federal government from seizing the looted funds and repatriating them to Nigeria, but “a simple trick” outsmarted him, the former attorney-general further said.

In his book, “Burden of Service: Reminiscences of Nigeria’s former Attorney-General”, Adoke insinuated that the Abacha family was so offended by his doggedness in the loot recovery that they found allies in the Economic and Financial Crimes Commission (EFCC) to hound him after he left office in 2015.

Adoke alleged that his refusal to “play ball” with the younger Abacha over his claim to ownership of Malabu Oil & Gas in the OPL 245 also offended him.

The former minister of justice is currently on self-exile, although he has promised to return to Nigeria “soon” to face EFCC charges regarding the Malabu/OPL 245 transaction.

“I confess that I did give him hell in the battle over the recovery of the public funds looted by his family when his father was the military Head of State from 1993 to 1998. I made Mohammed Abacha forfeit stolen monies hidden away in several jurisdictions across the world. He hates me to no end. I undermined every attempt to compromise the case and turned down several overtures and tempting offers made to me by both him and his agents. He thought he had outplayed the Federal Government, but I uncovered about $1 billion that had been well hidden,” he wrote.

“Perhaps his biggest grouse, to my mind, was the OPL 245 case. He said he owned 50 per cent of Malabu Oil & Gas Ltd. He claimed that the registration documents of the company had been tampered with and his name removed. That meant that he did not benefit a dime from the $1.1 billion the company had made from the sale of the oil block to Shell and Agip-Eni. But he had not come out openly to assert his shareholder’s rights. The political atmosphere did not appear favourable then. He only started making his claims after Malabu had been paid in 2011. When he approached me for assistance, I told him clearly that it was a shareholder issue and that the Federal Government could not get involved.”

Abacha ruled Nigeria from November 1993 until his sudden death in June 1998 — on the verge of transmuting from military ruler to civilian president.

He reportedly stole and stashed away billions of dollars which successive administrations have been trying to recover.

He wrote: “They had virtually succeeded in blocking Federal Government’s efforts at recovering quite a chunk of the funds looted by their patriarch, the former military ruler, Gen. Sani Abacha. Their attitude tended to imply that giving up about $1.3 billion of the loot was generous of them. Nigeria ought to have remained eternally grateful! They felt entitled to retain the rest of the loot to the tune of over $1 billion hidden in different havens in Europe. They had acceded to returning the laundered funds, yet turned tail to orchestrate dodgy schemes despite the fact that the government had kept its part of the bargain. Alhaji Mohammed Abacha, the oldest surviving son of Gen. Abacha, was particularly uncooperative.”

He said with the help of Enrico Monfrini, a Swiss lawyer, a large chunk of the loot was traced to various jurisdictions in the world and seized, but taking control of the funds and sending them back to Nigeria became difficult because of the antics of the Abacha family.

“The move to recover the funds was initiated by Gen. Abdulsalami Abubakar, who took over as military Head of State after the death of Gen. Abacha in June 1998. He promulgated the Forfeiture of Assets etc. (Certain Persons) Decree No. 53 of 1999. There was also a clause in the Decree that if assets not disclosed were later identified, the Abachas would forfeit them,” he wrote.

“In 2000, under the democratically elected administration of President Olusegun Obasanjo, the Federal Government engaged the services of Mr Enrico Monfrini, a Swiss lawyer, to trace the looted funds worldwide, recover them and facilitate repatriation to Nigeria. In all, Mr Enrico was able to trace about $2.4 billion to various accounts in Luxembourg, Liechtenstein, the UK, Channel Island of Jersey, France and Switzerland. More than half of the identified loot was returned to Nigeria, with Switzerland alone repatriating $500 million in 2005.

“As at the time I was appointed Attorney-General in 2010, over $1 billion was still hanging in various accounts across Europe as a result of the pranks being played by the Abacha family. We decided to redouble Nigeria’s efforts to recover the monies. Our first step was a holistic review of the strategies adopted by successive administrations since 1999 with a view to streamlining the process for greater efficiency. Then we mounted pressure on the Abachas and engaged with the various jurisdictions where the funds were stashed. Thereafter, we began to see results, despite the challenges. There was a significant increase, both in the quantum and rate, of recoveries.”

The country “appeared to have developed cold feet over returning about €185 million located in its jurisdiction, which funds had been frozen by court orders since 2000”.

Investigators had established that €179 million of the sum was paid as a bribe by Ferrostaal AG of Germany, one of the largest steel traders in the world, to whom Abacha had awarded the contract for the construction of the Aluminium Smelter Company of Nigeria (ALSCON), Ikot Abasi, Akwa Ibom State.

“Mohammed and Abba, Abacha’s sons, mounted legal obstacles against repatriating the money to Nigeria.
The Liechtenstein Supreme Court ordered its confiscation in 2012, but the Abachas appealed against that. The appeal was finally thrown out in March 2013. Still pushing their luck, they headed for the European Court of Human Rights in Strasbourg, France, and effectively delayed the return of the money to Nigeria. Although everybody knew they would not win the case in Strasbourg, Liechtenstein hung on the excuse of the lawsuit to resist returning the money. That was understandable: Abacha’s loot was worth about 25 per cent of the country’s annual budget in 2013,” he said.

Adoke when the Abachas seeming to have successfully frustrated our efforts at repatriating the €185 million loot, “I pulled a joker out of the pack. And they were soon brought meekly to their knees”.