Here are roads FG'll fix during Ember months and why 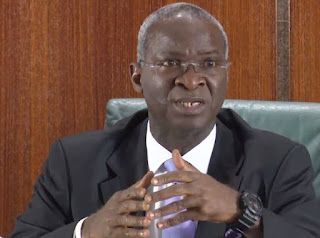 The Minister of Works and Housing, Mr. Babatunde Fashola SAN, has assured Nigerians that critical roads across the country, particularly those leading to fuel depots would soon be fixed in order to enhance fuel distribution and ease the usual high traffic during the ember months.

Fashola spoke in his office in Abuja on Monday while responding to a request by the Nigerian National Petroleum Corporation (NNPC) for urgent intervention by the Ministry on some roads leading to fuel depots without the distribution of petroleum products during the festive months could be seriously hampered.

The Minister, who assured that arrangements were already being put in place to fix such roads and a number of those which conditions had deteriorated as a result of heavy rainfalls, listed such selected roads to include Suleja-Bida-Lapai-Lambata; Oyo–Ogbomosho-Ilorin; Jebba-Mokwa-Tegina; Benin-Sapele-Warri; Benin-Auchi-Okenne; Enugu-Onitsha; Awka-Amansea and Odukpani-Itu roads.

On the state of the listed roads, Fashola explained that the Suleja-Lambata-Minna Road was in a fairly good condition adding that the failed portions were slated for emergency repairs during the ember month’s programme while work is ongoing on the Bida-Lapai-Lambata Roads where the contractor handling it has already stabilized a substantial part of the road.


The Bida–Minna Road, the Minister explained, is a Niger State Government Road and is in a fairly good condition while the Suleja –Lambata –Minna Road; is a Federal Government road under SUKUK funding.

Disclosing that his Ministry had commenced discussions with the contractors handling the various road projects for the commencement of repair and rehabilitation works as soon as the rains subside, Fashola said approval has been given for the Engineering Corps of the Nigerian Army to repair the bad portions of the Bokani-Makaera-Tegina-Birnin Gwari Road in Niger and Kaduna States, which is currently under procurement, due to the security situation in that axis.

He further explained that funding has also been a challenge, adding that the Federal Government would endeavour to meet its financial obligations to the contractors handling the various road projects to ensure that they returned to the sites.

He said work on the Oyo-Ogbomosho-Ilorin Road is on-going by the contractor handling the project, which, he explained, is one of the projects that received dedicated funding under SUKUK. According to him, although the project is being challenged by the current weather situation and funding, the old alignment of the Oyo-Ogbomosho route is receiving palliative attention.

On the Ilorin –Jebba –Mokwa Road, which is under a dualization contract, Fashola explained that the project has been divided into two sections with Ilorin –Jebba in Kwara State as Section1: while Section II comprises Jebba–Mokwa–Bokani Junction in Niger State adding that it is a new project and mobilization was still being processed.

For Okene–Lokoja Road, which is in four sections and under SUKUK funding, he explained that all the contractors handling the various sections had been directed to do palliative work on the failed portions of the road.

He said while a Federal Government appointed contractor is currently working on the Enugu –Onitsha Road, the bad portions of the Awka –Amansea Road are being repaired by the Anambra State Government.

For the Odukpani –Itu Road, the Minister said the contracting firm which is handling the project, has left the site as a result of the challenges of the weather situation and funding adding that the Ministry is currently intensifying efforts to address the challenges for the company to return to site as soon as possible.