Group protest over Bobriky's 'disgusting' lifestyle, call for his arrest 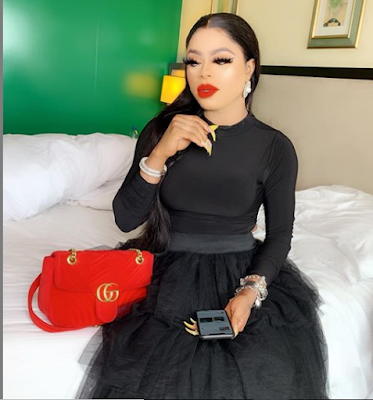 The youths issued the warning on Wednesday when members of NYCN took ‘Anti-LGBT’ protest to the headquarters of the NCAC in Abuja.

The youth in large numbers, carrying placards bearing different inscriptions, said they had declared Bobrisky a ‘persona non grata’ because he was a negative influence on Nigerian youths.

Comrade Akoshile Muktar, the Vice-President of NYCN (North Central), said Nigerian youths were against the activities of Bobrisky and urged NCAC as the custodian of Nigerian culture and values to make a declaration on the matter.

Muktar said: “Bobrisky should as a matter of safety and urgency leave the country if he must continue in his LGBT acts as it is alien to the culture and traditions of Nigeria.

NYCN describes the ‘Bobrisky brand’ as ungodly, unhealthy and disgusting and completely against our moral, cultural and spiritual values.

“We, therefore, declare Bobrisky as persona non grata, as he is a man and not a woman” he proclaimed.

“For national interest, we call on every combatant ready Nigeria youths and comrades of like minds to kick out Bobrisky as long as he has refused to change. Nigeria is not a place for LGBT and we shall fight to the end, as we call on the IGP and the Director-General of the DSS to use their good offices and men to stop Bobrisky.”

Muktar said the group had also protested to the National Assembly, DSS and Police headquarters, adding:  “we will not rest until Bobrisky is arrested and made to face the full wrath of the law.”

Otunba Segun Runsewe, Director-General of NCAC, who received the youth, commended them for taking the bold step against the Bobrisky-led LGBT group.

He noted that the council under his watch was already fighting against Bobrisky and his transgender antics, describing him as ‘bad influence and harmful to Nigeria’s culture and morals.’

“I must commend the NYCN for leading Nigerian youths on this laudable protest against evil and a bad influence on our youths. As you are aware, the NCAC has already taken a stand against Bobrisky and his gang because Nigeria has culture and values which must be upheld.

“Anyone who wants to practice gay or transgender activities should leave us alone and go to places where it is accepted but not here. NCAC as an institution is taking steps towards ensuring that a bill against transgender and all such activities is presented before the National Assembly,” he said